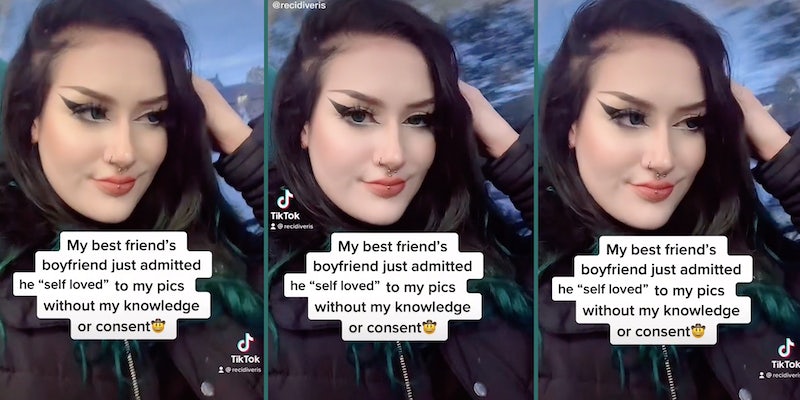 He did so without her knowledge or consent.

In a viral video, TikToker @recidiveris, whose name is Katie, said that her best friend’s boyfriend “admitted” that he masturbated while looking at photos of her. She made the point that he did this without her knowledge or consent, and she wrote that she’d rather he had not told her.

In another TikTok, she clarified that the photos and videos that her friend’s boyfriend accessed were “intimate.”

Men commenting on the video told Katie that she was overreacting, and she fired back.

“Can’t blame the guy,” user @johnhills5 said. “It’s what we do.” The commenter justified himself by saying that men are “controlled” by their penises. Katie posted a TikTok in response: “Men will say they’re controlled by their [penises] and then complain about being perceived as [rapists],” she said.

User @tripleh1210 told Katie that he thought she was “secretly pleased” that her friend’s boyfriend masturbated to photos of her and told her.

Katie explained that the issue at stake is the man’s relationship to her. “He’s my best friend’s boyfriend!” she wrote. “I’ve met him!”

To that, @megalux said, “Every guy does this with all of their [girlfriend’s] friends.” Katie responded with another TikTok: “The ‘not all men’ [motherfuckers] lookin real dumb [right now].”

To address the issue head-on (again), Katie made another TikTok.

“All the men in my comment section are really trying to convince themselves that it’s normal to ‘self love’ to photos of women they know,” she wrote in the overlay text.

Some commenters told her that the entire situation was her fault, but others shared similar experiences they’d had.

“Had to kick a dude in college out of the friend group because he had a folder of saved photos of a girl in the group she never gave him,” @morriganndthecrow wrote.

“When I was 18 working in a pub an old guy was showing me something on his phone and then I saw a bunch of my holiday snaps from my Insta saved there,” @kayr2181 commented.

“I was horrified when I found out my [boyfriend] in [high school] was doing this,” @666lian666 commented. “I couldn’t convince him why it was degrading and violating.”

Katie posted another video speaking on the accusation of her being “secretly pleased” by the situation.

“Men are programmed into thinking one thing… we actually mean another,” Katie said. “You think that when I say ‘this thing upset me,’ I’m secretly pleased about it. When I’m not… I’m not being coy. I didn’t enjoy it.”

The Daily Dot has reached out to Katie.