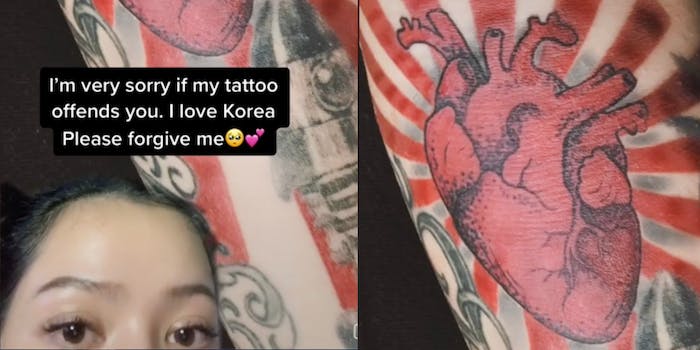 'I am ashamed of myself for not doing my research.'

After showing her arm tattoo, TikTok star Bella Poarch sparked an intense online dialogue about ethnic discrimination among her Filipino and Korean followers.

On Saturday, the Filipino influencer posted a TikTok video apologizing for her tattoo, which incorporates Japan’s rising sun flag. The flag is associated by many South Koreans with war crimes and oppression related to Japan’s occupation of Asian territories during World War II, according to a BBC article from January.

“I love Korea. I would never do anything to hurt anyone,” Poarch wrote in the caption of her TikTok video.

In a pair of tweets posted on Monday, Poarch, who lives in Hawaii, wrote she “didn’t know the history” of the design when she got the tattoo six months ago.

“But when I found out, I immediately had it covered and scheduled for removal,” Poarch wrote. “I am ashamed of myself for not doing my research. I sincerely apologize.”

One commenter compared it to having a swastika tattoo.

Poarch, who has over 16.8 million TikTok followers, also vowed on TikTok that she would have it removed. “I did not know the history behind this tattoo and I will educate others about,” she wrote in a comment.

Soon after, Poarch tweeted in response to apparent attacks on Filipino TikTok users that came after her apology video.

“Y’all can attack me,” Poarch wrote on Tuesday. “I’m ok with that. But when y’all attack Philippines and make fun of them, that’s when I lose my shit.”

On Twitter, the hashtag #CancelKorea trended as people defended Filipinos and Poarch while condemning discrimination.