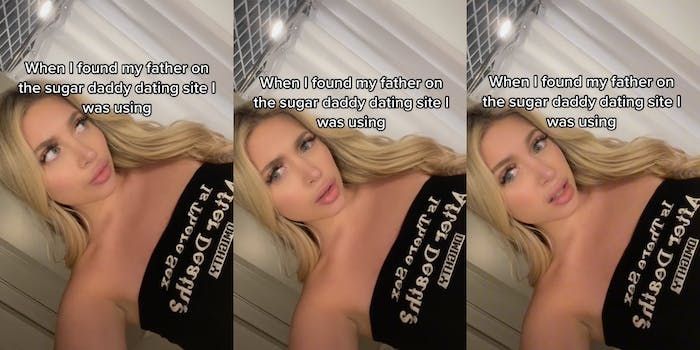 ‘I would of sent a Venmo request’: TikToker says she found her dad on sugar daddy site she was using

She says she messaged him.

Viral TikToker Ava Louise says she found her father on a sugar daddy site she was using.

While such a discovery would have likely repulsed many people, Louise took the opportunity to message him on the site.

“He doesn’t answer my texts [so] I thought he might answer me there,” she wrote in a comment on the TikTok video.

But instead of answering, Louise says her dad blocked her, and they haven’t spoken of the incident.

Although viewers found the story entertaining, it could be just that—nothing more than a silly, possibly made up story meant to entertain Louise’s audience. The TikTok star is notorious for fabricating stories.

In July, Amazon called Louise out for a “hoax” video claiming that she received a package containing used menstrual products. In January, Louise admitted to making up a rumor that Kim Kardashian and Kanye West divorced because of an affair West had with YouTuber Jeffree Star.

Last year, Louise made headlines for saying boomers deserve to die of coronavirus.

Regardless of whether she truly found her dad on a sugar daddy site or not, viewers were eating up her story and cracked several jokes in the comments section of her TikTok.

“I would of sent a Venmo request,” another added.

Another said, “If he don’t spend that money on his OWN daughter,” accompanied by several sobbing emojis.

Several other viewers shared their own stories of finding their fathers, friends’ fathers, teachers, and other people they wouldn’t want to be their sugar daddy on similar sites.

Louise did not respond to the Daily Dot’s request for comment, and it’s unclear what site she allegedly found her father on.