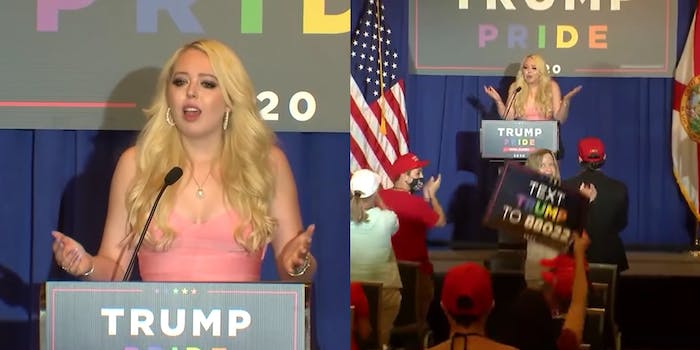 At one point, she claimed her 'best friends are gay.'

Tiffany Trump proved she is, in fact, her father’s daughter after giving a rambling and confusing speech hyping him up at a “Trump Pride” event in Florida this week.

The oft-forgotten child had only been speaking for less than a minute before touting the family line of persecution, lamenting that President Donald Trump was the victim of “fabricated lies” from social media that accused him of being anti-LGBTQ.

In reality, the president has repeatedly posed a threat to the LGBTQ community, opposing or lifting discrimination protections, appointing anti-LGBTQ judges, and choosing a well-known homophobe as his vice president. Perhaps most notable, the president went against advice from military leaders to ban transgender troops from serving.

So it makes sense that one notable moment from Tiffany Trump’s Pride speech mentioned her father’s support of “gays, lesbians, the L-G-B-Q-I-A-plus” community, blatantly leaving the T for transgender out of the acronym.

Footage of the event suggests it was sparsely attended, and the backlash of both the event and Trump far outweighs the support coming in.

“This may be the worst speech I’ve ever seen,” noted Daily Beast editor Molly Jong-Fast.

Equality Florida jumped in to denounce the event, with Executive Director Nadine Smith commenting that “Donald Trump is the worst President the LGBTQ community has ever seen.”

“This event is a pathetic attempt to hide his appalling record and it’s fooling no one,” she continued. “We are tired of Trump’s lies and our community understands a second term would be devastating.”

Tiffany Trump and the roughly two dozen people who actually showed up to the Florida Trump Pride event, apparently, would disagree.