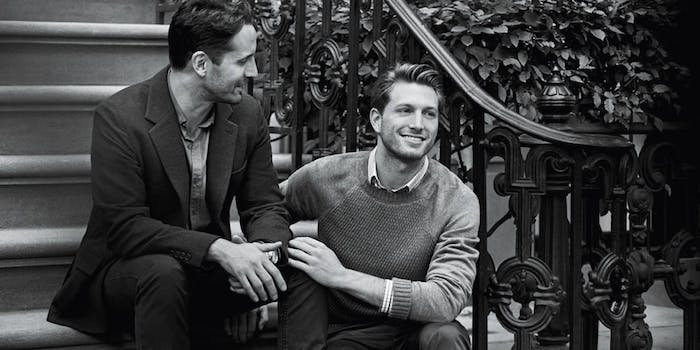 The jeweler joins the race for consumer dollars when same-sex couples say, "I do."

A jeweler with a 178-year-old history just broke out of its little blue box to include a same-sex couple in its ads for the first time.

Tiffany & Co. unveiled a new ad campaign for engagement rings that features a same-sex couple among a series of seven couples shot by fashion photographer Peter Lindburg. The men aren’t actors, but an actual NYC couple on the verge of marriage, according to ELLE.

“Will you promise to never stop completing my sentences or singing off-key, which I’m afraid you do often?” reads the ad. “And will you let today be the first sentence of one long story that never, ever ends?”

“Nowadays, the road to marriage is no longer linear, and true love can happen more than once with love stories coming in a variety of forms,” said Linda Buckley, Tiffany & Co.’s VP of North American PR, in a statement to ELLE. “The Tiffany engagement ring is the first sentence of the story that a couple will write together as they create a life that is deeply intimate and exceptional, which is the message we hope to convey through this campaign.”

Not only is it a step in the right direction, it’s a savvy business move to openly include same-sex couples, now that same-sex marriage is legal in more than half of the United States, and growing. That’s a lot of new consumers to bring into the Tiffany brand.