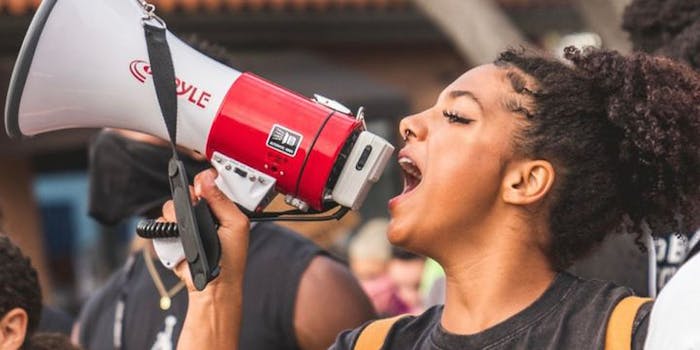 Over 50,000 people have signed a petition demanding the release of BLM activist Tianna Arata

Police are asking for the 20-year-old activist to be charged with five felony counts.

People are petitioning for the release of Tianna Arata, a 20-year-old activist who was arrested during a Black Lives Matter protest in San Luis Obispo, California, on July 21.

Arata organized a protest that reportedly drew about 300 people and resulted in the blockage of traffic on Highway 101 and some property damage. Video circulating on social media shows about half a dozen members of the San Luis Obispo Police Department arresting Arata, forcing her into a police car and shoving other protesters to the ground as they try to intervene.

“Protesters damaged the hood of a passenger vehicle and smashed the rear window where a four-year-old child was in the back seat and had glass shattered on him,” a San Luis Obispo PD press release read. Video obtained by the San Luis Obispo Tribune shows a car driving through a crowd of protesters, knocking one person onto the hood; the car can then be seen driving away with a shattered rear window.

A GoFundMe created to raise money for Arata’s legal fees refutes the San Luis Obispo PD’s version of events, saying, “There was no child and no indicator that the people protesting broke the windshield. The media also said that protesters threw objects at law enforcement however, this wasn’t the case.”

The San Luis Obispo PD is now requesting that the San Luis Obispo County District Attorney’s Office file charges against Arata for false imprisonment; conspiracy; inciting a riot; engaging in an unlawful assembly; and resisting, obstruction, or delaying a peace officer, KSBY 6 News reports. In total, the police are asking for five felony counts—four of false imprisonment and one of felony conspiracy—and three misdemeanors. The DA’s Office has not yet filed any charges.

Demonstrators have protested Arata’s arrest and demanded her release both in-person and online. Protesters assembled outside the San Luis Obispo County Courthouse with signs that said “Drop the Charges,” “Black Lives Matter,” and “Do the Right Thing.” On Monday morning, Twitter users circulated the #FREETIANNA hashtag, making it the highest-trending U.S. Twitter topic for several hours.

One of the people using the #FREETIANNA hashtag was Twitter user @melissayumm, who identified themselves as Arata’s best friend.

“#FREETIANNA My best friend is being charged with 8 charges including 5 felonies,” @melissayumm wrote. “For peacefully protesting alongside myself and our community. There was no riot it was a beautiful peaceful protest filled with Black and Brown joy.”

The aforementioned GoFundMe created to fund Arata’s legal fees has raised nearly $31,000 so far, exceeding its $20,000 goal, and the remaining profits will be donated to bail funds for other protesters. Meanwhile, a change.org petition titled “Support our Young Protest Leaders” has amassed over 52,000 signatures, with a goal of 75,000.

“Protest our young Black lives movement leaders’ right to protest and demand that the district attorney not pursue any charges against Tianna Arata,” the petition reads. “Our young Black leaders deserve to be heard, seen, and supported.”