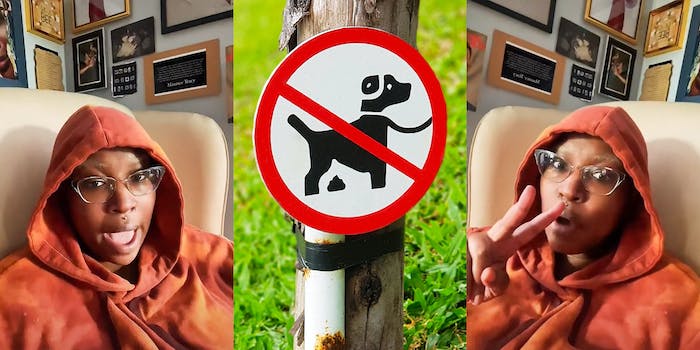 ‘Please tell me you’re giving it all back to him’: Woman says her neighbor is throwing dog poop into her fenced yard

The creator claims there's a dumpster nearby, but her neighbor still throws the feces into her yard.

A woman on TikTok says one of her neighbors has been throwing dog poop over her fence into her yard. As expected, she isn’t happy about it.

The TikToker (@onmyblackassmind) says she found the dog poop after discovering a mushroom growing in her backyard. She says she was excited to find a wild mushroom growing, but as she searched for more in her yard, she realized there was “a lot of dog poop.”

She says her yard is inaccessible to anyone without a key and has a six-foot privacy fence around the perimeter. But thankfully, the TikToker has 11 security cameras, she says. The dog poop culprit is allegedly a man who lives about a block away from her and across the alley.

The TikToker says the man has been taking his dog through a back alley to a field behind her house.

“Instead of bagging [the dog’s poop] up and throwing it away in the dumpster that he passes twice to get over to that field, he’s been throwing it in my yard,” the TikToker says in the video. “I’m about to ruin his life.”

In a comment on her video, the TikToker added that she won’t post the security camera footage online. “Y’all I’m not posting incriminating videos online lol, no video evidence will be posted,” she wrote.

Her video received over 139,000 views as of Sunday, and many viewers argued that she should press charges against the man.

“Press charges. you have video proof,” one viewer commented.

“Get him,” another viewer commented.

However, she noted in a follow-up video that she did not want to get the police involved. Instead, some users suggested the incident seems like a “return to sender situation.”

“Put it all in a bag and put it on his porch with a note saying he forgot something. I’d mix it with water and on a really hot day do it,” one user wrote.

“I would pick it all up and put it in his yard with a cute note,” a second user suggested.

“Please tell me you’re giving it all back to him,” a third user urged. In response, the TikToker commented, “Absolutely.”

Some viewers were caught up with the neighbor’s method of delivering his dog’s poop to the TikToker’s yard.

“if it’s not bagged was he grabbing it WITH HIS HANDS,” one viewer asked.

“I think he’s just dumping it out of the bag in her yard that seems a little less unhinged than just bare hands poop throwing,” another viewer speculated.

Regardless of how he did it, one viewer pointed out that it probably took more effort to dump the dog poop in the neighbor’s yard than to actually take it to the dumpster.

“It’s LESS work to pick it up and throw it away, than to pick it up, make sure nobody’s looking, and fling it into someone’s yard,” they commented.

The Daily Dot reached out to user @onmyblackassmind via TikTok comment.