The shooter was white. 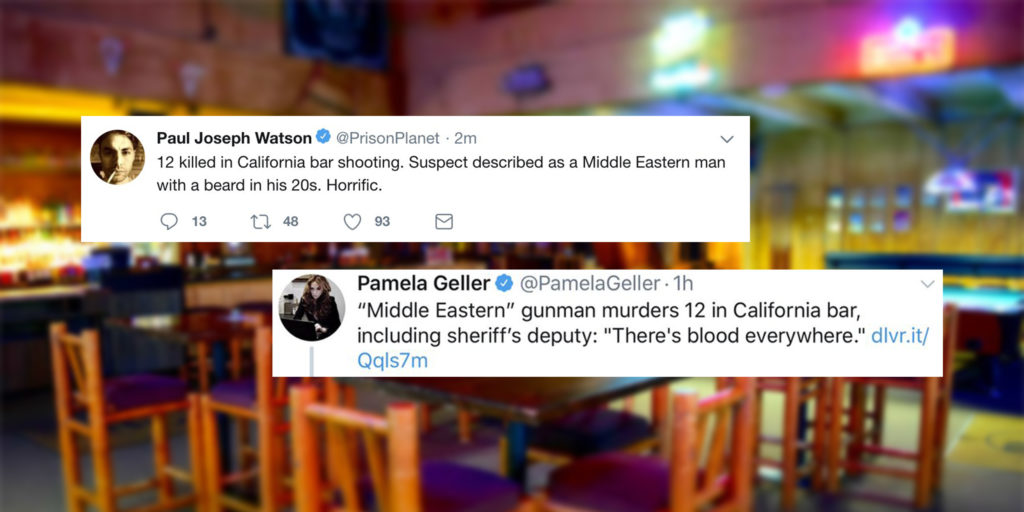 No, the shooter who killed at least 12 people at the Borderline bar in Thousand Oaks, California,  on Wednesday night wasn’t Middle Eastern. He’s been identified as 28-year-old Ian David Long, who had previously served in the Marine Corps, and was a white man.

However, several conspiracy theorists who regularly espouse anti-Muslim rhetoric made the jump to identify Long, who is also dead and believed to have shot himself, as a “Middle Eastern” man before he was formally identified, and some still haven’t owned up to spreading misinformation even now that he has.

On Twitter early Thursday, local anchor Jory Rand shared that he had spoken with a man who was at the entrance of the dance hall whenever the shooter began firing. Rand wrote that the witness had “described shooter as middle eastern looking with a beard.”

Rand hasn’t deleted the tweet, or clarified the identity of the shooter. A recording of the interview was shared nationally and broadcast on CNN. Snopes, however, has debunked the conspiracy.

Several people have pushed back on Rand’s reporting of a single witness’ testimony and treating it as fact.

Thousand Oaks shooter identified as Ian David Long, a white former US Marine. As usual Prison Paul was ahead of the curve this morning, he has since deleted this tweet. pic.twitter.com/RMhn4kCVd6

Have heard 3 different accounts on the identity of the male shooter:

The shooter at Thousand Oaks California has been identified as Ian long. Hey @PrisonPlanet & @amymek that’s a weird name for a middle eastern bloke isn’t it?? pic.twitter.com/fsUor6V0iT

Watson has since deleted his tweet and clarified that the information was wrong in a reply to a call-out of his original tweet. Loomer, meanwhile, has since questioned why the shooter was no longer being identified as “Middle Eastern” despite his identity being revealed as white. Geller has doubled-down, framing her assertion as plausible, be it under a media coverup, or otherwise. “This may turn out to have been something other than a jihad attack, the media” would be doing a “coverup,” Geller wrote on her blog.

Early reports from mainstream news outlets reported that he was "Middle Eastern." That explains my tweet, which I deleted as soon as I learned this was wrong. Now will the mainstream media and a thousand blue check marks delete their false and damaging tweets about me? No. pic.twitter.com/odnQdx4ID6

At what point will conservative bloggers take a moment to verify reporting before demonizing people from an entire region? It remains unclear.