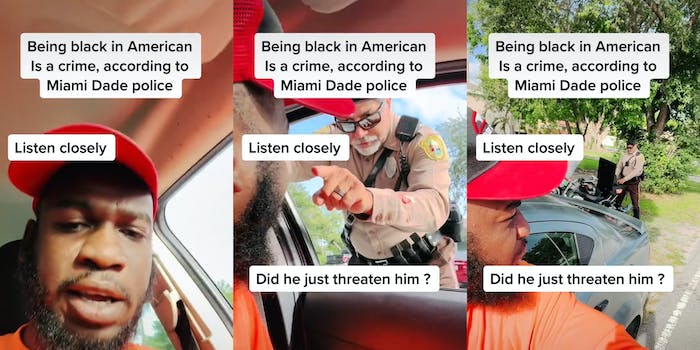 ‘These are the people who are supposed to protect us’: Police officer tells Black man, ‘This is how you guys get killed’

A Black TikToker captured a police officer telling him, “This is how you guys get killed,” while pulling out his license and registration during a traffic stop.

Nick Portdepaix (@giliam509) posted a TikTok on June 16 showing his interaction with a Miami-Dade Police Officer. The footage shows the officer asking for Portdepaix’s license and registration.

“If not, you will not be going to work today,” the officer tells him. “It’s a simple thing. This is how you guys get killed out here.”

Portdepaix films the officer and says that he has “nothing on” the TikToker and that he “threatened to kill [him].”

“You’re going to court, man,” Portdepaix says to the officer in the video. He wrote in the video’s overlay text that “being Black in [America] is a crime according to Miami-Dade police.”

On Wednesday, Portdepaix’s video had over 75,000 views.

In an Instagram direct message to the Daily Dot, Portdepaix said that he was pulled over by Officer Sanchez for a seat belt violation. According to the Florida Highway Safety and Motor Vehicles Department, Florida law requires anyone in a car to wear a seatbelt.

He also told the Daily Dot that he contacted the Miami-Dade Police Department and that he plans to let his lawyer handle the rest.

In a follow-up video, Portdepaix showed a statement that the Miami-Dade Police Department released about his video, also shared by the department to the Daily Dot. The statement says that the department is aware of Portdepaix’s video and has initiated an internal investigation to review the officer’s body camera footage.

“The officer’s patrol duty was changed to administrative desk duties pending a complete
investigation of the traffic stop, the officer’s comments, and conduct,” the statement says.

Commenters on Portdepaix’s video agreed with the TikToker about taking the officer to court, and many expressed that the officer was wrong.

“These are the people who are supposed to protect us, yet do stuff like this,” @plycz wrote.

“We get pulled over for no reason. A cop pulled me over before and literally just ran my name and let me go,” @moonclit commented. “Didn’t have a reason.”

In an email statement to the Daily Dot, Detective Angel Rodriguez said that “while there is an ongoing internal affairs investigation,” no further information is available.