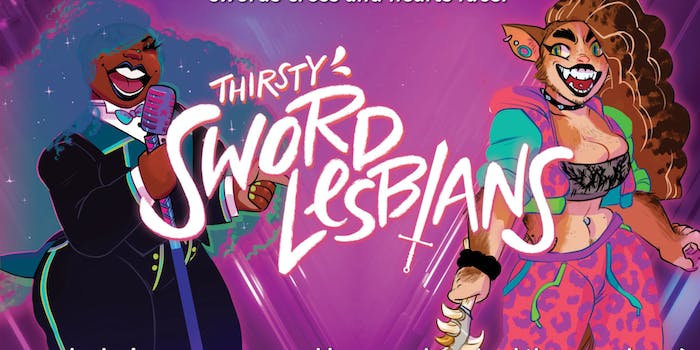 What do you get when you give thirsty lesbians swords? A bombshell of a Kickstarter fully funded in just three hours. Meet Thirsty Sword Lesbians, a new role-playing game as easy to play as it is LGBTQ-inclusive.

Thirsty Sword Lesbians is a tabletop role-playing game published by Evil Hat Productions, illustrated by Kanesha Bryant, and developed by Electronic Frontier Foundation attorney April Kit Walsh. The game, which “celebrates the love, power, and existence of queer people—specifically queer people with swords and a lot of feelings,” mixes the Powered by the Apocalypse engine’s accessible role-playing mechanics with story-driven gameplay.

Players choose between nine queer-coded archetypes, from “Beast” to “Nature Witch,” and create their own original character. From there, players jump into a pre-made scenario or develop their own as they embrace “melodramatic and queer stories” all about “relationship triangles, mystery, intrigue, relationship anarchy, celebration, and revolution,” among other attributes.

“In this game, you will solve problems with wit, empathy, and style, fight when something is worth fighting for, and redeem (or seduce) at least a few of your adversaries,” the game’s Kickstarter notes. “You’re part of a community that embodies important ideals and you’ll strive to protect it and make your world better.”

Thirsty Sword Lesbians is designed to be relatively modifiable, so while the game “fundamentally assumes that the [player] characters crave connection,” player characters don’t actually have to seek each other out sexually or romantically. Thirst can be purely platonic. Swords and lesbians are also optional offerings, as players can switch these out with all sorts of weapons, sexual orientations, and gender identities.

“We’ll let you in on a secret: you don’t have to play a lesbian. The game plays with themes that are common for all sorts of people who are marginalized on the basis of gender and sexuality, as well as feelings that go beyond the queer experience,” the Kickstarter notes. “If you want to play thirsty sword cishets, we’re not going to stop you—just don’t be surprised if the game turns them queer.”

“April here, feeling overwhelmed with gratitude! This beautiful book is going to be a reality, thanks to you! I’ve been working on this game for over two years and it has come a long way,” Walsh wrote on Oct. 13.

Thirsty Sword Lesbians began development in 2017, albeit development took “a bit slowly” due to Walsh’s work as a civil liberties attorney, she told the Daily Dot. Development was inspired partially from queer fanfiction, where LGBTQ writers can “explore the feelings that never get represented by legacy media cartels,” she said.

“I’d say my primary inspiration was urgently wanting to tell stories about dashing queers having adventures and connecting emotionally and finding that the game I wanted wasn’t out there yet,” she told the Daily Dot over email.

Thirsty Sword Lesbians has a lot of its design roots in marginalized communities, including those that Walsh isn’t part of. Kickstarter backers can fund free “community copies” of the game on itch.io, letting Evil Hat and Walsh send the game to marginalized players who cannot afford to purchase it. The game’s text also relies on an open license, making it easier for players in difficult financial situations to obtain and learn how to play the game.

Cultural sensitivity was a key part of Thirsty Sword Lesbians’ development, as well: Walsh worked with two sensitivity consultants to help polish the game’s themes and mechanics, assuring the final version was “as welcoming as possible” while avoiding “missteps and cultural sensitivities of which [she] was ignorant.” This resulted in the game’s five contributing authors’ scenarios, which will be further enhanced through an additional stretch goal that lets Walsh and Evil Hat commission art from Bryant for these writers’ stories.

“It’s been incredibly meaningful to hear from people with marginalizations that I don’t share who feel seen and spoken to by feelings in this game—it does go beyond the queer experience,” Walsh said. “Thirsty Sword Lesbians‘ characters aren’t perfect—each of them has a core emotional conflict that they’re figuring out and working through, and that’s part of what makes the stories real, dramatic, and relatable.”

As for the game’s title, Walsh has experienced some homophobic backlash from cisgender, heterosexual onlookers who believe the game is an adults-only title. But Walsh isn’t interested in toning down the game’s themes just to make straight players feel a little more comfortable. “[T]he cishets sometimes assume this is going to be a sex orgy game because that’s how lesbians are presented to the male gaze under patriarchy. It’s not! It’s about love and connection and the most explicit thing you’ll see in the book is people kissing,” Walsh told the Daily Dot. “But also I am not going to compromise any of the game’s ability to speak to queers merely to make it more appealing to a cishet audience.”

Thirsty Sword Lesbians is available for backing now on Kickstarter. By pledging $10 or more, backers receive immediate access to the game’s prototype PDF, which was previously available on itch.io. The game requires three to six players and lasts approximately two to four hours per session.