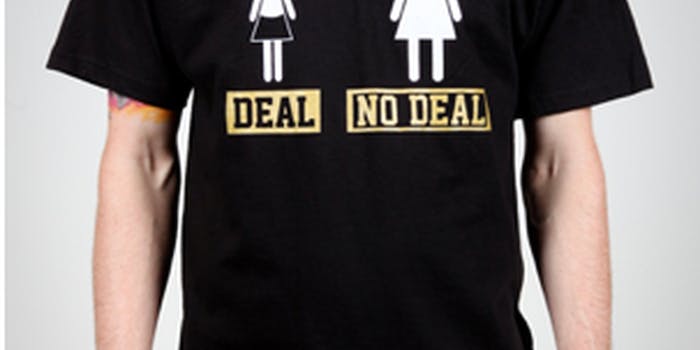 Why these unintentionally terrible Twitter accounts are the online equivalent of Spencer's Gifts and must be stopped.

I found a stat that frightened me this morning more than my blood-alcohol content: Apparently more than 1.5 million combined followers find @MensHumor and @WomensHumor funny.

Yep, the same demographic that keeps Two and a Half Men on air also finds tweets about misogyny, sex, and uh, ranch dressing funny and retweet-worthy.

Over on @MensHumor, normal tweets are as follows: “Remember ladies, the best way a girl can give a hand job is when she uses her mouth” and “Word of advice ladies … never go for the ‘discount’ morning-after pill.” Good stuff, guys! It’s like I just walked into the Spencer’s Gifts of Twitter accounts.

The humor at @WomensHumor is equally boorish, but after I found that women can be funny (thanks to Bridesmaids!!), why ruin their good graces with the humor gods? Who, I am guessing, are guys, like how Michael Patrick King manhandled Sex and the City.

Okay, so I know I shouldn’t be expecting anything that would earn a spot on “The Year’s Best Humor Writing” on Splitsider, but this is the kind of crap that only encourages studios to produce movies like The Hangover to become a full-fledged Star Wars-like series, when one movie was enough.

Remember, when you have you sit through extended trailers for The Hangover: Prequel Part III on Hulu before you catch-up on Archer, this is your doing because you just had to follow those accounts.

But I’m done mocking them because someone named Ayesha, who should earn a place in the Internet BB Hall of Fame or at least an iTunes gift card, lampooned the accounts for me with @HumorforMens and @HumorforWomens.

The men’s version amusingly satires the misogyny and misspelling, as its the only way us guys know how to communicate if you only read @MensHumor.

“reason y beer is better than woman; beer doe’snt get jelos when u grab another beer also beer dosent run away when I try to kiss it. kill me” tweeted @HumorforMens.

@HumorforWomens is sassy in its own way, and while it mocks @WomensHumor, many of these tips sound like they fell out of an issue of Cosmopolitan magazine. “Yoga pants are the sexy alternative to a personality!” is a favorite tweet of mine—as it’s somewhat true.

So, everyone, stop retweeting jokes about the Waffle House being a slut because A) that makes no fucking sense, and B) it’s not funny. Instead follow @HumorforMens and @HumorforWomens.

Then you can call misogyny funny because it’s satire.