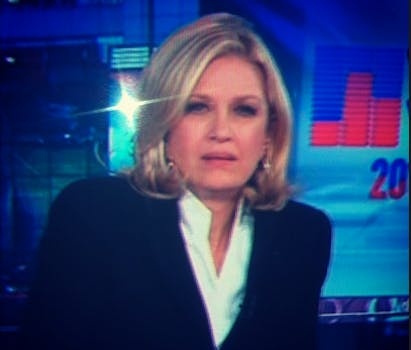 The Hater: Diane Sawyer is a spirit animal and other election ephemera

The Hater: The best and the worst things from the Internet during the election.

The Internet weathered the election largely unscathed. We all brought our A-game Tuesday evening, which makes me so proud!

Twitter didn’t topple under its own snark, Facebook remained largely tolerable due to my exhaustive list of blocked people I don’t agree with (healthy!), and Tumblr popped a Pepcid AC to prevent it from regurgitating memes and GIFs from all over my dashboard.

1) Lindsay Lohan’s lack of analysis
Where the hell were you Linds? Your adept political analysis demonstrated so impressively during the debates had me opening a separate tab in my browser, all ready for your election tweets. But no, you were too busy passing out in your Liz and Dick press kit. You squandered a prime opportunity to become the Chuck Todd of the pill-popping, Birkin-toting, recovering-bullying-victim, struggling actress demographic. You also left yourself vulnerable to Amanda Bynes and to teach you a listen, I hope she capitalizes off this.

2) Donald Trump’s Twitter diarrhea
Well, at least we got freakout from another failing ginger: Donald Trump. Watching his mental breakdown unfold on Twitter was a worthy replacement for LiLo’s absence. The Horse_eBooks-style puerile and dopey attacks directed at America’s anchor Brian Williams, second-term Pres. Barack Obama, and uh, Richard Belzer, proved to be cathartic for everyone. Good thing he backtracked on his bombs directed at Williams because A) YOU DON’T HATE ON BRI WI, B) that’s going to make for a very awkward NBC holiday party, and C) his Twitter account has bypassed his hair as the most ridiculous thing about him.

3) @NowThisNews’ ASCII art that I thought broke my laptop
The “social Web” startup took an annoyingly troll-ish way to announce election results. Instead of trying to out-sarcasm each other like normal Twitter users, they spent way too much time creating ASCII pictures for the winning states. Other sites lauded them, but I am in the dissenting category. Every time I saw one its tweets, I had a mini conniption that my laptop screen was malfunctioning. And even worse, the little pieces of art didn’t line up properly on my Twitter app. Please just shoot me and hold my wake at Chili’s if ASCII art is the new GIFs.

4) Diane Sawyer’s sober haters
LEAVE DIANE ALONE. The grande dame of ABC News (not Barbara Walters, I’m pretty sure she’s dead) might have been a bit wine drunk on election night. So what? Who cares? That’s my natural state of being seven days a week. The haters came out, but I want them to stop pouncing on her wine-induced slurs, facial expressions, and flailing arm spasms. Diane Sawyer is my new spirit animal. Her coverage and loopy analysis actually made this boring spectacle amusing, because what would you rather watch? Not even a Four Loko-fueled Scott Pelley could seduce me into watching CBS News.

5) The brilliance of #ElectionDaySecrets
Seconds after the announcement that Obama secured a second term, Twitter browned out with celebratory tweets and sighs of relief (on my feed, at least). But BuzzFeed curator of Internet oddities, John Herrman, developed a stupidly brilliant, I-wish-I-thought-of-this idea. He seized on Twitters’ exasperating meltdown for people to confess their darkest secrets with the hashtag #electiondaysecrets.

I gleefully dove in, confessing that I had watched Startups: Silicon Valley three times in 24 hours. Jerkwad Herrman retweeted it. Maybe my public admission of guilt will teach me to never use Twitter again.