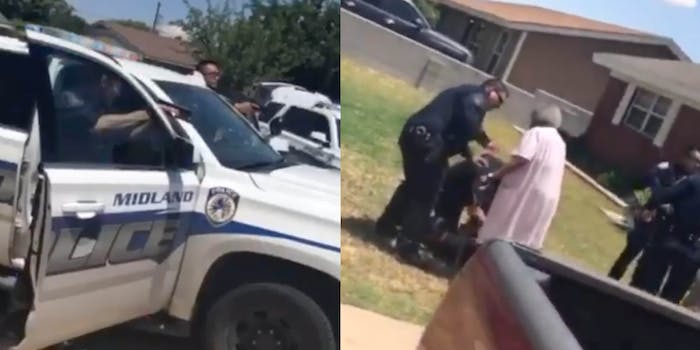 'He's Black. Y'all not see how many Black people are getting shot?'

A video of the mid-May arrest of 21-year-old Tye Anders is sparking outrage online.

Anders, a young Black man, was reportedly pursued by Midland, Texas, police after rolling through a stop sign on May 16. As the video begins, police can be seen surrounding a home, where Anders kneels with his hands in the air. At least three police officers have guns pointed at the youth as he prostrates himself on the grass.

In the background of the video, neighbors and family members can be heard pleading with cops to put their guns away. “He’s Black. Y’all not see how many Black people are getting shot,” a voice can be heard asking. “And y’all have guns on him. He’s only 21, of course he’s f*cking scared.”

The people surrounding the escalating incident grow gradually more concerned as police continue to keep their guns trained on Anders. All the while, in the background, a frantic Anders can be heard pleading. “I’m scared. I’m scared,” he sobs.

Near the end of the almost three-minute video, a slight, 90-year-old woman approaches Anders where he lies on the ground. According to Reporter-Telegram, she is Anders’ grandmother. Four police officers likewise approach the young man.

A moment later, the 90-year-old woman is tumbling to the ground. The video momentarily pivots from the scene, making it difficult to tell what happened, but panicked voices can immediately be heard. “Granny! Granny,” several people yell as they attempt to reach her. “Y’all pushed her,” the surrounding crowd accuses. As people gather to assist the elderly woman, police block them and the video is cut off.

Following an initial refusal, the Midland Police Department later released dashcam footage of the moments leading up to the viral video. Officers reportedly pursued Anders after he failed to stop at a stop sign. According to Anders’ arrest affidavit, officers attempted to stop him, but his “vehicle began increasing its speed in an attempt to elude.”

Anders didn’t stop, according to authorities, until he reached the residence where the video was filmed. Anders’ lawyer, Justin Moore, however, tells a different version of events. According to Moore, police did not turn on their vehicle lights until Anders had arrived at his grandmother’s home.

The arrest affidavit also fails to note the weapons pointed at Anders throughout the exchange. Ultimately, the 21-year-old was handed a felony charge for evading arrest. His lawyer intends to dispute the felony charge, and investigate any civil rights violations that may have occurred. According to Moore, these include, but are not necessarily limited to, “excessive use of force, equal protection violations, and malicious prosecution.”