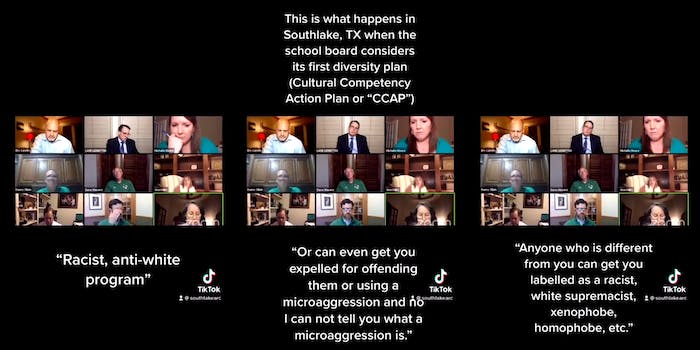 A Texas school district came under fire this week as a video recording from a virtual school board meeting surfaced on TikTok. In the video, white parents warn of the consequences of enforcing an “anti-white” cultural diversity education program to help protect students of color in schools.

The TikTok video of the Carroll Independent School District board meeting on March 8 was removed from the platform due to violations of hate speech guidelines and reshared to Twitter Thursday.

In the meeting, white parents and other citizens voiced concerns about the Cultural Competency Action Plan, or CCAP, which has caused division in the district for more than three years.

“CCAP is a racist program. Its intent is to target students based on the color of their skin and it doesn’t get much more racist than that,” a woman says in the video during the public comment portion. Her Zoom nametag identifies her as Anne Franklin.

The caption says, “This is what happens in Southlake, TX when the school board considers its first diversity plan (Cultural Competency Action Plan or ‘CCAP’).”

“This is my prediction of the unintended consequence of implementing this racist, anti-white program,” Franklin continues. “This program will force white parents to have a talk with their children to keep them safe and it will go something like this, ‘Do not hang around with or be friends with anyone who is different from you, racially, ethnically, culturally, or religiously … Anyone who is different from you can get you labeled racist, white supremacist, homophobe, xenophobe, etc.’”

Also during the public comments, Patty Yeager, a parent of a student in the school district, says that the program and “obsession with race and equity that will be detrimental to a rigorous education.” Yeager also says Dr. Seuss has been canceled, a popular conservative talking point, and that “even math is under attack.”

The TikTok, which was originally posted by the user @southlakearc, posted another video clip from the board meeting on the platform Thursday that has 17,200 views and over 2,000 comments with the caption. “Apparently cultural competency will cause destructive space travel,” the caption says.

The school district’s website includes a drafted plan of the Cultural Competence Action Plan created after a viral video showed students from the school district chanting a racial slur at a party in 2018. The plan’s mission statement pushes for greater emphasis on diversity and inclusion at all schools in the district to combat racism and educate students.

The draft states plans to “emphasize cultural awareness within the anti-bullying/kindness focus area,” and “develop students’ cultural competence to embrace diversity at all CISD campuses, and enable a culturally safe and respectful environment for students to value and practice inclusion.”

The school board, however, has repeatedly stalled movement on the plan. WFAA reports that one parent is so opposed to the proposal that they’re suing the school district.

Users on TikTok were baffled by the irony of a group of all-white school board members and parents discussing the harmful effects of incorporating diversity education into the school district.

“CCAP and there’s no person of color… the irony lol,” one user wrote.

Users on Twitter were equally enraged by the video.

“This is how some people like to fool themselves into believing they are not racist. They have been told racism is bad,” another user tweeted. “No one really likes admitting they are a bad person. So some look for reasons to justify their beliefs. In this case come up with a imagined scenario.”

Other users on Twitter took a stance defending the Southlake community as a place of kindness and support for everyone.

“Come to Southlake rather than just reading about it. It is a very caring community— for EVERYONE!” the user tweeted.

Another resident commented back with their much different perspective on the community.

“They all want the non-alt-right to get the ‘hell out of Texas.’ But other than that, very caring. Except if you’re Black. But very caring,” one user tweeted back.

The Carroll School Board did not immediately respond to the Daily Dot’s request for comment.