But the group associated with the ad is not happy with the apology.

On Monday, Facebook issued an apology to the Australian feminist group Cherchez la Femme after rejecting the group’s ad featuring plus-size model Tess Holliday over claims it violated their “health and fitness policy.”

The ad was for an event titled “Cherchez la Femme: Feminism and Fat” and depicted Holliday in a bikini. The group, which hosts pop culture talk shows, appealed the decision, but Facebook doubled-down.

The Guardian reports that at the time of the appeal, Facebook wrote, “Ads may not depict a state of health or body weight as being perfect or extremely undesirable. Ads like these are not allowed since they make viewers feel bad about themselves. Instead, we recommend using an image of a relevant activity, such as running or riding a bike.”

In response to the decision, the group posted on its Facebook page:

Facebook has ignored the fact that our event is going to be discussing body positivity (which comes in all shapes and sizes, but in the particular case of our event, fat bodies), and has instead come to the conclusion that we’ve set out to make women feel bad about themselves by posting an image of a wonderful plus sized woman. We’re raging pretty hard over here—both because Facebook seemingly has no idea that plus sized, self describing fat women can feel great about themselves, and also because we haven’t been able to boost the original damn post. 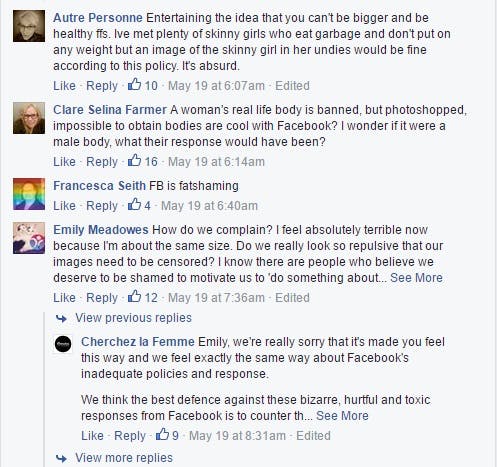 Facebook eventually apologized, writing in a statement, “Our team processes millions of advertising images each week, and in some instances we incorrectly prohibit ads,” the statement said. “This image does not violate our ad policies. We apologize for the error and have let the advertiser know we are approving their ad.”

Cherchez la Femme is not satisfied with the apology, telling the Guardian that it hopes Facebook changes their policies.