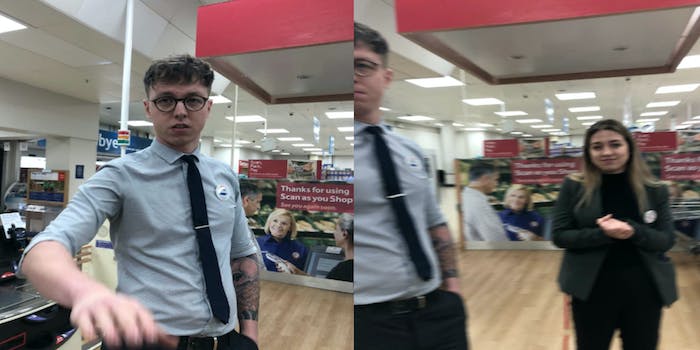 The shopper says his family needs lactose milk, but the store refused to sell him two cartons.

Two Tesco workers are being accused of refusing to sell two cartons of milk to an Asian man and his family.

“These two staff in Tesco refused the whole shopping sale to us Asians. They are now being racist. My family needs to have lactose milk. When I explained that to him he started laughing. I WANT A FULL INVESTIGATION FROM @Tesco @tesconews #tesco #racist,” Twitter user @taha_aftab wrote, along with photos of the employees in question.

Tesco responded to the complaint saying it would look into it, provided the Twitter user sends more information via DM. They also requested that the photos of their employees be removed from Twitter.

“Hello Taha, thanks for getting in touch. I’m very sorry about this. I’d be happy to deal with your complaint in a DM, could you please provide some more information? I would also ask to respect colleague confidentiality to remove these pictures from this public post,” the British grocery store wrote in response.

Many responded to news of the incident by calling for the employees to be fired and better trained.

“Disgraceful Tesco. You need to sort yourself out. This is unacceptable,” one user wrote.

Others disagreed that the employee’s pictures should be removed, accusing the store of trying to “cover-up” the incident.

“Tesco is public limited company and your staff are on duty wearing uniform/name badges. They have full indemnity to be photographed. Now, sort out your racists staff,” Twitter user @Official_WZRD said.

Another user urged taha_aftab to not remove the photos until Tesco sorts it out.

The Daily Dot has reached out to both taha_aftab and Tesco but did not receive a response by publication time.