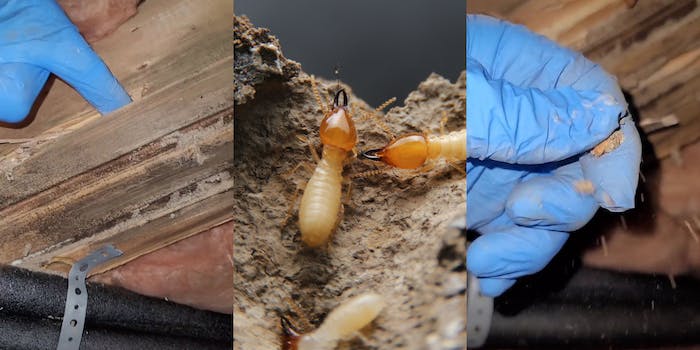 'He did that inspection from the truck.'

A TikTok video showed a termite infestation in a house that was just purchased. The realtor allegedly told buyers it passed inspection. Upon further review from a professional inspector, he was quickly able to tell that wasn’t true.

“Always choose your own termite inspector when buying a home,” he writes in the caption.

The video also featured photos of the original inspector’s review where it can clearly be seen that they wrote there was no infestation found.

The TikTok was viewed over five million times and over 4,400 people left comments on the video. One commenter noticed the price of the initial inspection and said, “Well $65.00 he did that inspection from the truck.” Someone else wrote, “That should fall under Theft by Deception. They have their own guy so he can lie on the paperwork for them.”

Some realtors in the comments suggested the homeowners should seek legal counsel and get this resolved, while others wanted to make sure people know this isn’t a regular practice. “A realtor provides options of who to use. realtors don’t receive kickbacks. the termite and home inspector are licensed separately,” a user commented.