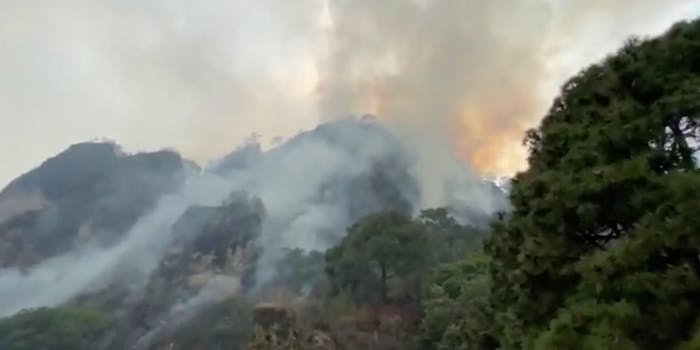 The woman and her friend were trying to recreate a Mexican ritual.

A woman recording a TikTok in Mexico in mid-May accidentally set fire to a forest, burning about 150 acres and forcing the evacuation of about 60 people.

A 25-year-old woman and her friend were recording themselves juggling fire in the town of Tepoztlán in the state of Morelos in central Mexico. The woman accidentally lost control of one of the flames, and it caught a tree on fire, according to Latin American news outlet infobae.

The fire quickly spread and devastated the tropical forest, which was a protected natural zone and archeological zone.

When the women began to scream as the fire grew, about 20 neighbors came to help set it out. However, the fire was too large, and they were unable to stop it. By the end of the incident, more than 500 people worked for three days to stop the spread of the fire. In addition, the Mexican government sent a helicopter to help battle the flames.

The fire harmed parts of an archeological site and destroyed parts of the forest, which was being protected because of its flora and fauna, according to infobae. The town is known as a “pueblo magico,” or a town especially important to the country’s tourism.

While the woman was brought to a police station following the incident, no one officially filed a complaint against her so she was released.

Neighbors say the girl and her friend were trying to recreate a ritual of Mexican ritual for the TikTok, and the recorded clips were never published.

So the next time you want to record a TikTok of yourself juggling fire, make sure not to do it in a protected forest and archeological zone.