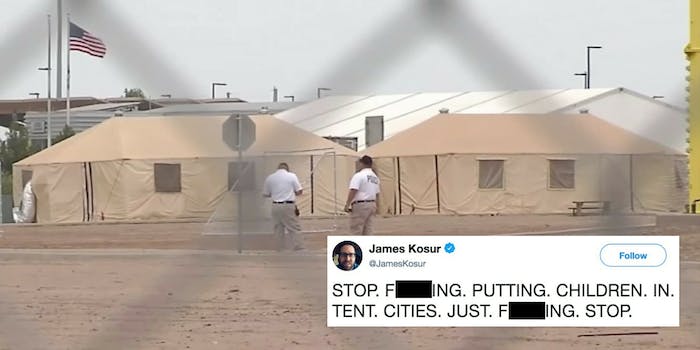 An estimated 1,600 children have already been transported to live in the tent city.

In the dead of night, hundreds of migrant children have been awakened, loaded on buses, and transported across the country to Tornillo, Texas, to be housed in tent cities. There, the children sleep in groups of 20 on rows of bunks in air-conditioned tents.

According to the New York Times, migrant children have been transported to Tornillo “in recent weeks” from contracted shelters or private foster homes, where they received regular schooling and visits with legal representation. Despite those resources, contractors running shelters like nonprofit Southwest Key faced criticism from advocates who argued that the groups were profiting from the detainment of children. But at the Tornillo tent cities, there is no schooling, and access to legal services is limited, the Times reports.

So far, 1,600 children have been relocated from their child detention facilities to Tornillo, which can hold up to 3,800 children. Shelter workers say children are moved in the middle of the night and given “little advance warning” so that they’re less likely to run away.

The Trump administration has been preparing for these arrangements for months, and knowledge of the tent cities became public amid the summer’s zero-tolerance family separations. It’s the administration’s latest effort to accommodate increasing numbers of migrant children, more than 13,000 so far, which have placed many shelters near 90 percent capacity since May.

More than 100 children have yet to be reunited with their families since the end of family separation policies, but most of the remaining migrant children crossed the border by themselves, either illegally or in seek of asylum, according to the Times.

Following the Times’ report, Americans across Twitter are decrying the Tornillo tent city and the methods used to transport children there, showing that the country’s outrage toward the administration’s treatment of migrant children has yet to be contained.

Please read below and get angry.

The richest nation on earth has just created a tent city to house the children it stole from their parents. This is a historic injustice. https://t.co/aMZbg0LHTY

Sen. Jeff Merkley (D-Ore.), who attempted to storm a child detention center operated by Southwest Key earlier this year, called the action an “abomination.” On Monday, he wrote on Twitter that the practice of waking children in the middle of the night to relocate them is “cruel and horrifying.”

Waking children in the middle of the night and spiriting them off to a desert prison camp is cruel and horrifying. Taxpayers are paying for this, and it’s pure evil. This is a dark stain on our nation’s history, and it has to stop. https://t.co/fPFE4TUfAa

“Locking up thousands of children without even a school. Children belong in homes and parks and schools. Not behind barbed wire!” Merkley tweeted on Sunday. “Taxpayers are paying for this, and it’s pure evil. This is a dark stain on our nation’s history, and it has to stop.”

So now we, The United States government, are moving migrant children, 3,800 so far, to tent city concentration camps along the Texas Border. No legal Representation. No Media. No Hope. #TheResistance needs to step up its game and end this. Through history we've seen this before pic.twitter.com/Y5eKTRcbis

@nytimes “tent city?” Call it what it is. It’s a concentration camp.

And some blamed the moving of the children on the Republican party.

One of the most important reasons to get Republicans out of office. “Even though the scandal is mostly out of the news, the numbers have ballooned, from 2,400 detained migrant children last year to 13,000 today, the N.Y. Times reports. -Politico

The Republican Party has created a concentration camp for migrant children on the Texas border. They are forcibly moved there secretly at night to keep them and the practice quiet. There's no school, no legal aid, limited mental health care. #Tornillohttps://t.co/DVMjuyiWLm

— the supreme court will destroy everything we want (@SeanMcElwee) September 30, 2018

Tornillo’s tent cities are supposedly temporary, with the children ages 13 to 17 sent to the city being “likely to be released sooner” and placed with sponsors. However, advocates say the children could be staying for months. Read the full Times report here.