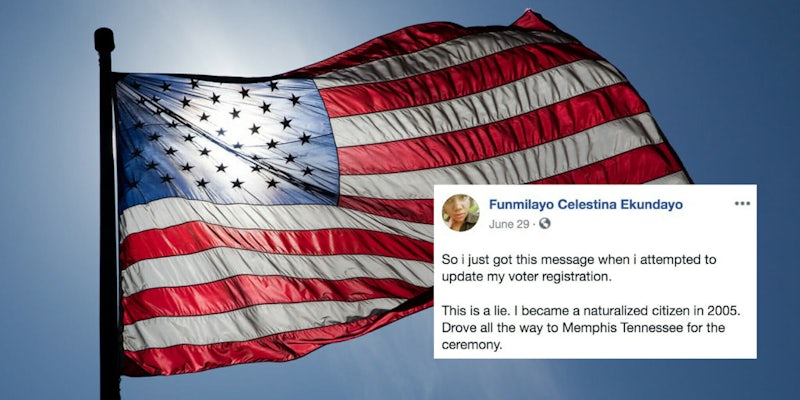 On Friday, a 30-year-old culinary student and Nigerian immigrant in Nashville, Tennessee, attempted to update her voter registration information so that she could vote in the state’s upcoming primaries. The woman, Funmilayo Ekundayo, had voted in two previous elections, so updating her registration should have been routine.

But after getting through the second step of Tennessee’s multistep online voter registration system, which rolled out in 2017, Ekundayo was told by the website that records showed she was “not a citizen of the United States.” It was just days before Tennessee’s July 3 deadline to vote in the August primaries.

Ekundayo, her parents, and her siblings arrived in Tennessee in 1999, when she was 12; she became a naturalized U.S. citizen in 2005. In addition to voting twice since being naturalized, she renewed her Tennessee driver’s license months after the website’s launch. And yet, she was being told that, at the very least, her citizenship had “not yet been updated with the Tennessee Department of Safety.”

Ekundayo told the Daily Dot that she is just one of at least 10 naturalized citizens she’s aware of who was told by Tennesee’s voter registration website that they’re not citizens. After being hit with the message on Friday, Ekundayo posted about the alert on Facebook.

“So I just got this message when I attempted to update my voter registration. This is a lie,” Ekundayo wrote alongside a screenshot of the website. She ended her post with a haunting conclusion: “So, a warning to all naturalized citizens in Tennessee, check your status now!”

So i just got this message when i attempted to update my voter registration. This is a lie. I became a naturalized…

In the comments following her initial post, she shared a photo of her U.S. passport, stating that she’s a U.S. citizen with the caption, “Imma just leave this here in case I get deported. Lololol.” Despite her levity, Ekundayo told the Daily Dot that she’s found the website “glitch” to be no joke.

“This is the very first time I’ve ever had an issue with anything as far as my status as a citizen,” she said. “I don’t have a criminal history. It really honestly was a big shock and created a fear in me, and that’s the reason I posted it on Facebook, because I know what state we’re in politically in the United States … I wanted to make sure that I documented my experience in case this ends up being something that comes down at the federal level, people will know.”

Tennessee Secretary of State Tre Hargett launched the voter registration website last August in an effort to “improve accuracy and efficiency for voters and election officials,” he said at the time. In April 2016, the Tennessee Legislature passed the Online Voter Registration Bill for the creation of the website, which was to include “safeguards to discourage voter fraud.” (A spokesperson for the secretary of state’s office did not immediately respond to the Daily Dot’s request for comment regarding Ekundayo’s situation.)

“If an applicant’s name, birthday and other identifying information isn’t in the state’s system or the applicant doesn’t have a Tennessee driver’s license or identification card, the applicant will be directed to complete and mail in an application to the applicant’s county’s election office,” the Tennessean reported at the time. But to register by mail, the paperwork must be postmarked or hand-delivered to the correct office 30 days before an election.

Since Friday, Ekundayo’s post has gone viral, having been shared more than 17,000 times. The first person to comment on the post was her younger sister, Naomi, who said that she’d been having the same issue. Naomi wrote that she had called the Division of Elections number to inquire about the error and was told “everything was fine” but was shown the same message the second time she attempted to register.

Another Tennessee resident, Valeria Davis, later posted about having the same problem despite being a naturalized citizen of 19 years. In Facebook posts of her own, Davis wrote that when she attempted to change her address on her registration online, she received an error.

I DEFINITELY am though. I went to Memphis years ago to the immigration building to get proof that was like $600. Wtf.

Davis told the Daily Dot that she’s lived in the U.S. since she was 4 years old, has both a Russian and U.S. birth certificate, and has a social security number and proof of citizenship.

“It’s just a bit shocking and confusing that all of a sudden I can’t do anything and wouldn’t have known had I not seen another post and checked my status!” Davis said.

Just hours ahead of the deadline on Tuesday, Davis said she was suddenly able to register online using her naturalization date and naturalization ID number. Ekundayo said that she and her sister Naomi are also both now successfully registered.

As a result of the online error, the Tennessee Immigrant and Refugee Rights Coalition is investigating Ekundayo’s account. Ekundayo said she met with the coalition on Tuesday and was told there are at least 10 cases of misinformation being shown to naturalized U.S. citizens attempting to update their Tennessee voter’s registration information online. Ekundayo said the American Civil Liberties Union of Tennessee is also looking into the matter.

After Ekundayo’s post went viral, various people have reached out to her attempting to remedy the situation, including the office of Democratic Rep. Jim Cooper. “Jim believes nothing is more important than making sure everyone is able to exercise their right to vote,” his press secretary, Chris Carroll, told the Daily Dot.

Ekundayo said she also received a call from Mark Goins, the election coordinator with Tennessee’s division of elections. She said Goins told her the website was designed to tell immigrants whether they can vote in the U.S. and insisted that the website was working accurately—despite Ekundayo telling him that the website overlooked her naturalization.

She said Goins told her he had reached out to the Tennessee Department of Safety with her information and was told that the department didn’t have proof of her citizenship. Megan Buell, director of communications for the Tennessee Department of Safety and Homeland Security, confirmed this to the Daily Dot, saying: “The department’s records do not reflect her current citizenship status. Once she sends in current documentation then she will be current in the system. This has been communicated to her.” (The Daily Dot has reached out to Goins and will update if he responds.)

However, Ekundayo said she was required to show the department proof of citizenship—her U.S. passport—when she renewed her driver’s license in November, which she said the clerk photocopied at the time.

“[Goins] just seemed unconcerned about it, ‘Well the website’s working the way its designed to work,'” Ekundayo said.

While Ekundayo may have been able to navigate the website’s error with the help of her viral Facebook post, today is the deadline for Tennessee voter registration for the Aug. 2 primaries. Other people who encountered the same message might not have been able to register.

“The website definitely needs to be fixed,” Ekundayo said. “Knowing the glitches that are happening in the system, it’s obvious that the documentation process and the checks and balances are really not there, or it’s faulty at best … This is not going to help voter turnout, if that is what they’re trying to achieve.”

Editor’s Note: This story has been updated to include comment from the state’s Department of Safety and Homeland Security and Rep. Cooper’s spokesperson.