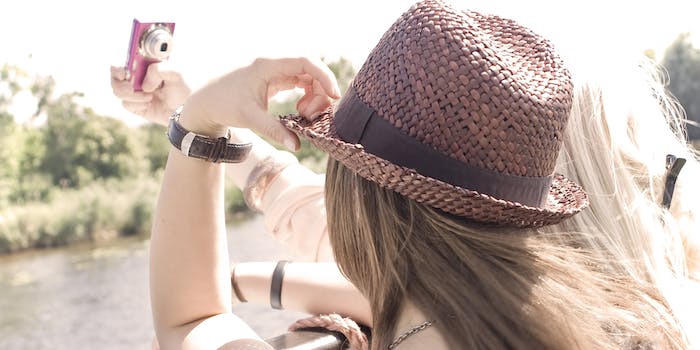 Using the selfie mode on her camera, Susannah Lewis expresses confusion about why girls would do such a thing.

There are a lot of things parents do not understand about teens, such as duck lips, hashtags, and selfies. Susannah Lewis, who goes by the moniker “Whoa Sasannah,” is one of these moms, and she’s going viral with her video titled, you guessed it, “I’m confused by the youth of today.”

Blogger and vlogger Lewis frequently uploads videos of herself, using her phone to make commentary on mom life. In this particular video, she talks about going into TJ Maxx and noticing some teen girls taking selfies, an action that she cannot comprehend. She also does so using the camera’s selfie mode.

Lewis makes gagging noises while she judges girls for using flattering camera angles, and expresses shock at the fact that they would take selfies in the first place.

The video has been shared over 17,000 times and has over 21,000 likes. The majority of the comments on the video share Lewis’s incredulity at teens today, noting that they all find selfies to be incomprehensible. 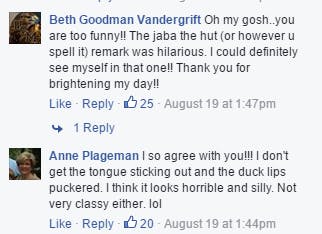 But some commenters think Lewis is being too hard on teens. 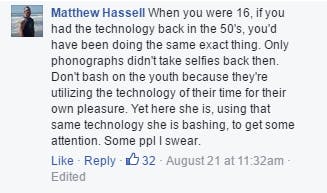 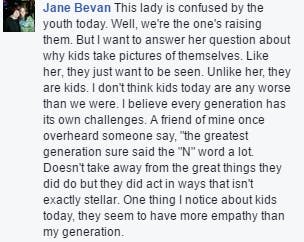 In a 2015 article, Sarah Ann Cantu defended her generation’s use of selfies, quoting rocker Ezra Koenig saying, “There’s only one you. I could Google image search ‘the sky’ and I would probably see beautiful images to knock my socks off. But I can’t Google, you know, ‘What does my friend look like today?’ For you to be able to take a picture of yourself that you feel good enough about to share with the world—I think that’s a great thing.”