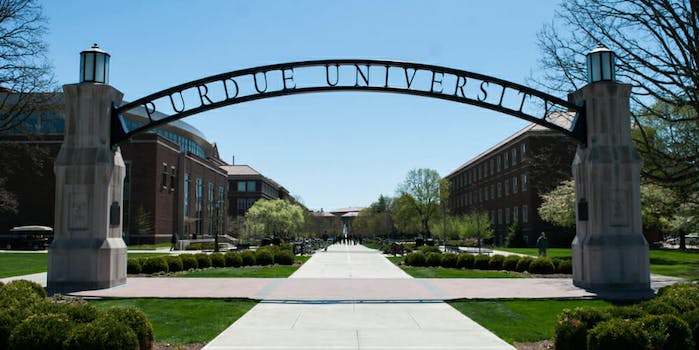 One alumni said the temporary dorms look like a halfway house.

People are sharing their concerns and anger after images of Purdue University’s “auxiliary housing” were posted on Instagram this week, as the “makeshift” dorms left much to be desired.

According to the Purdue Exponent, the student-run paper that posted the photos on its Instagram account, these temporary dorms are being set up in basements and study lounges in dorm buildings on campus. The room shown in the pictures is divided into dorm room-like sections by the dorm room furniture; there are not even privacy curtains. According to BuzzFeed News, a temporary dorm like the one in the post would typically house eight to 10 students.

Faced with an excess of admitted students, Purdue University Residences continues to place some students in makeshift rooms in the basements and study lounges of residence halls around campus, like these in Shreve and Meredith residence halls.

According to Beth McCuskey, the vice provost for student life at Purdue, even though the situation isn’t ideal, it is necessary, because there are more incoming students who want to live on campus than there are dorm rooms. This year alone saw 500 more students than they expected.

McCuskey told BuzzFeed News that students in larger auxiliary housing spaces, like the one in the pictures, would be the first to move into normal dorms, and said that typically happens “within the first few weeks of class.” However, students in smaller temporary dorms with fewer roommates may have to stay there through most of the semester, unless they are willing to move off campus.

Now, imagine dropping your child off and you enter a room called “Auxiliary Housing” and THEY DONT HAVE THEIR OWN FREAKING DORM ROOM W ONEEEEE ROOMMATE. But it’s a freaking SHARED OPEN SPACE.

Purdue tripping tripping. This a hell naw. This look like jail fam. A halfway house. pic.twitter.com/ypSNWrqOF3

As her tweet went viral, other people voiced their concerns and anger over the housing situation at Purdue.

So I guess their belongings are just free for all. Because literally anyone can go through or walk off with their stuff. 🤦🏾‍♂️

Some posted that Purdue’s situation was no big deal compared to what other schools did to accommodate overcrowding.

This is nothing, look at what students had to deal with in the 80s at my college pic.twitter.com/oXsRMZSyxI

My dorm room was meant for 2 people and they shoved 4 beds and 4 desks in. We could sleep holding hands and I couldn’t even sit at my own desk because there was a bed blocking all the drawers for $60k a year… I WISH I had that much space to breathe!!!!!!

As many pointed out, Purdue University isn’t the only school that’s lacking housing for its students. McCuskey told BuzzFeed News that it is “pretty typical to have some model of temporary housing.” She also said that while students do still have to pay for these makeshift open space dorms, they are charged the schools lowest rate, of about $1,200 a semester.