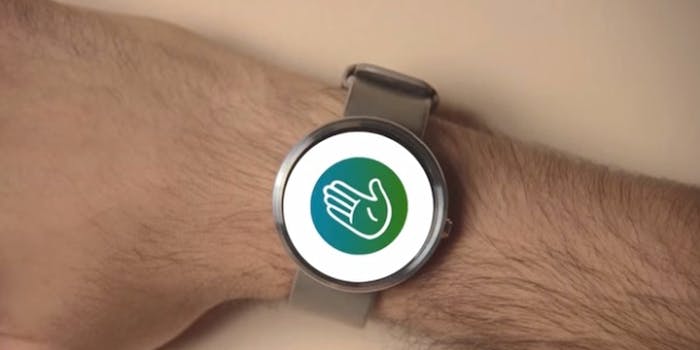 It's David vs. Goliath.

“It didn’t have good reviews,” he told the Daily Dot. “It was pretty basic. My friends and I decided to expand it, make it integrated, and make it fun.”

The teens have tuned their algorithm to produce pretty reliable results, but co-founder Forrest Cinelli said that the next step is to incorporate noise-detection data and the watch’s accelerometer.

Although their Indiegogo page says that they’ve done most of their testing with “a single Moto 360, exchanged across our team time and time again,” Nagpal said that they’ve been taping their phones to their wrists to do the bulk of the testing. It has worked so well for them that they’ve made one of their campaign’s rewards a “special wrist strap so you can attach your smart phone [sic] to your arm and still use the app.”

These problems aren’t just limited to men, either. Last April, an educational app called Happy PlayTime, which aimed to teach women about self-pleasuring, was swiftly rejected from the App Store.

The Beater Meter might not be able to charge your iPhone like Pornhub’s device can, but what the teens lack in technical offerings, they make up for with a positive spirit—and good PR. Once they get their product off the ground, they plan to donate a portion of their ad revenue to their company’s charity program. It’s called Beat it to Beat it and it aims to “raise awareness and fund research for testicular cancer.”