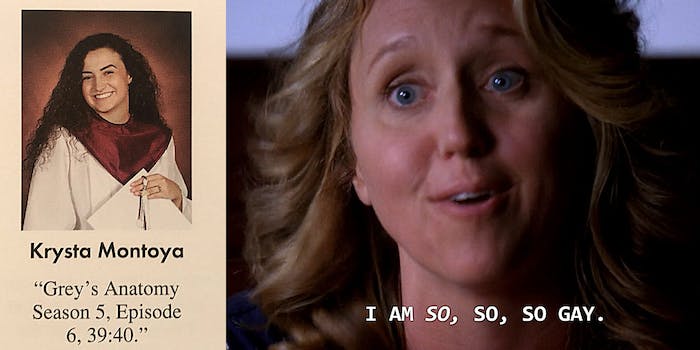 An 18-year-old senior from Albuquerque, New Mexico, came up with a clever yet cryptic idea for her senior quote, and she’s since gone viral for it.

After yearbooks went out at Krysta Montoya’s high school, fellow students kept asking why “Grey’s Anatomy Season 5, Episode 6, 39:40” was her senior quote. So on Monday, she turned to Twitter with an explanation, showing the exact line spoken by Erica Hahn to Callie Torres with 39 minutes and 40 seconds left in the episode: “I am so, so, so gay.” The characters also enter into a lesbian relationship for a time.

Montoya’s tweet has since garnered over 140,000 likes and nearly 37,000 retweets, with many celebrating the quote for both its meaning and its execution.

I'm obsessed! This is genius

This might be the best senior quote to date, bravo.

I love your story! Grey’s is also my favorite show, I finally came out at 35 – best thing I ever did! I’ve been with my partner 25 yrs, we finally married 3 yrs ago. Congrats to you…. now go find your Arizona or Callie! 💝

I love gay senior quotes so here was mine pic.twitter.com/SJTssVOZxy

Also, her friends are pretty amazed that she’s going viral.

TEN THOUSAND LIKES KRYSTA CAN I GET UR AUTOGRAPH

omg dont forget abt me when u make it big

In an interview with BuzzFeed, Montoya said that she came out as a lesbian during her freshman year in high school and ended up losing friends as a result. The quote, she explained, wasn’t just a joke. It was also a message about her sexuality.

“I feel as if some people did not believe me,” she explained to BuzzFeed. “In fact, throughout high school, people said by senior year I’d be dating a boy. So I think I did this to make a bold statement towards that comment from some of my peers.”