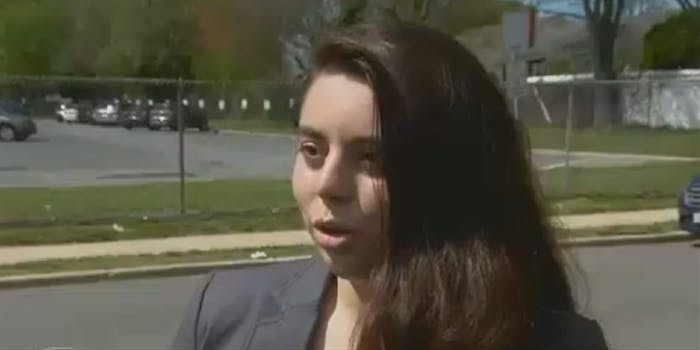 She says members don't 'understand the issues students are facing.'

Gabrielle Anzalone was suspended from Lindenhurst High School in March after she participated in the anti-gun violence protest #Enough: National School Walkout. Now, nearly two months later, the 18-year-old is running to be a member of the Lindenhurst Board of Education.

Anzalone, who says she’s “close to Leslie Knope,” a nod to the beloved character from Parks and Recreation, has a passion for local politics that’s pretty obvious from her resume alone. She previously organized an anti-gun violence march in Long Island, interned for a local politician, and volunteered for Bernie Sanders’ presidential campaign.

This June, she’ll graduate from high school, and next Tuesday, the school board election will decide whether she gets to enact real change for Lindenhurst’s students and parents.

“In no way is this a knee-jerk reaction or me trying to spite the board,” Anzalone told BuzzFeed News. “I knew I was going to get suspended and was fine with the repercussions. What bothered me was there was no communication between us, the school, and the school board.”

@News12LI @ABC7NY Today myself and 35 other students at Lindenhurst High School were suspended for walking out. But we are not stopping here. Tonight, at 8 pm, we will be attending the Board of Education meeting. We're going to make a change. pic.twitter.com/Voq2u4DVR1

4/20/2018 : the 19th anniversary of the Columbine massacre & 20th school shooting in the US in 2018. Enough is enough. We must all agree on sensible measures to ensure the safety of our students so that they can focus on success instead of survival.

Anzalone wants to improve technology for students, accommodate LGBTQ teens, and help parents connect with the school’s educational system even if they don’t speak English. But most of all, Anzalone is motivated to join the board because its members are much older than the students they’re governing.

“They don’t understand the issues students are facing,” Anzalone said to BuzzFeed News.

Anzalone wasn’t the only New York teen suspended for participating in the National School Walkout on March 14. Lindenhurst originally planned to punish her and 35 others students with three days’ worth of in-school suspensions after participating in the protest. But the administration absolved students after New York Gov. Andrew Cuomo (D) called on state schools to “reverse course and cease any disciplinary actions.”

However, Anzalone argued the school board’s lack of communication on the issue left students feeling isolated from an apathetic governing body.

“If I was on the board, I definitely would have wanted to speak to the students […] we really didn’t have a chance to talk to the [board],” Anzalone told News 12 Long Island. “We tried emailing. There were no answers.”