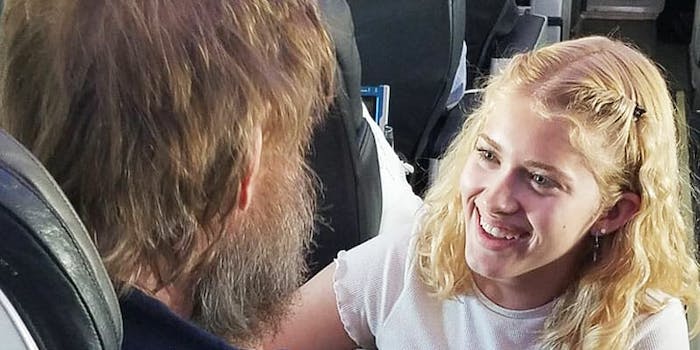 This California teen’s decision to help a blind, deaf man on a plane is an inspiration

In what continues to be the year that the kids were alright, this heartwarming and inspiring story comes to us from a California teen who stepped forward to help a blind, deaf man when no one else could. Jane Daly shared on Facebook last week that she and her daughter Clara were on their way home aboard an Alaska Airlines flight, after their original flight from Boston had been canceled and they had to scramble to make an earlier one.

Not long after the flight took off, one of the flight attendants asked if anyone aboard knew sign language, because they had a blind, deaf passenger on board and none of the staff knew how to communicate with him—which required signing into his hand. As it turned out, Clara had been studying American Sign Language for about a year to help with her dyslexia, which she saw as “a way to communicate without having to read and write.”

Jane writes that her daughter “jumped up” at the opportunity, and she was taken to the passenger—an older gentleman named Timothy and began communicating with him. Clara was able to help him several times throughout the flight, such as asking for water and letting him know how much time was left until the plane landed. Toward the end of the flight, Timothy asked for Clara again, but this time he just wanted someone to talk to, she told CBS Los Angeles. Said Clara: “He didn’t need anything. He was just like lonely and wanted to talk.”

Despite the fact that the mother and daughter pair then had a layover in Portland—which was Timothy’s destination—instead of their previously booked direct flight to Los Angeles, Jane said that Clara believes that it was fate that their original flight was canceled so she could help this man.

“She’ll probably kill me for posting this, but—proud of my girl,” Jane wrote at the end of the post, which you can read in full below. It just goes to show that a little kindness to a stranger can go a long way.

The Dalys have had a tumultuous last several days while we vacationed to help my mom settle into her new home.(see…