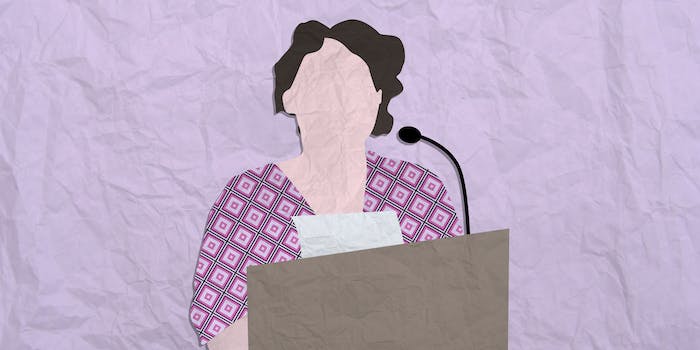 A Pennsylvania teen wants to take on the federal bathroom-access policy.

Sigourney Coyle doesn’t have any transgender classmates that she knows of—nor has she even started her freshman year at Emmaus High School yet. But that didn’t stop her from speaking out against the theoretical concept of someday having a transgender classmate when she enters the Pennsylvania school this fall.

On Monday, 13-year-old Coyle—encouraged by her mother Aryn—spoke to the East Penn School Board about the federal government’s bathroom access policy, which it clarified in a letter to school boards nationwide this May.

Coyle went on to say that because she does not feel comfortable changing in front of students who might be transgender, she would fail gym for not participating, and thus flunk out of high school.

The student also said that the Emmaus High School principal gave her an accommodation—allowing her to postpone taking gym class until the summer in order to give her time to, ostensibly, continue fighting the federal policy.

In an interview with Morning Call just after the school board meeting, Coyle’s mother spoke about her daughter’s privacy rights in school.

“Although transgender students are going through a very difficult time and deserve some sort of special accommodations for their situation,” said mom Aryn, “this is not the correct accommodation, to violate the privacy of everybody else.”