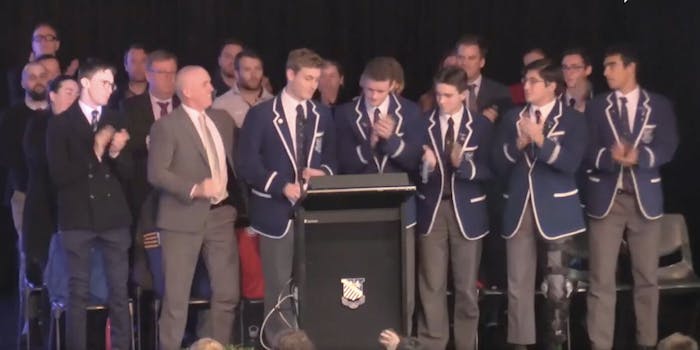 'I have come to understand who I am.'

A student received was met with a hall full of applause after he revealed that he’s gay during a school assembly at his Catholic high school, SBS News reported on Monday.

Finn Stannard spoke in front of more than 1,500 students and teachers at Saint Ignatius’ College in Riverview, Australia.

“I’ve been working towards this speech for four years,” Stannard said, according to SBS News. “In those four years, I have come to understand who I am and how to not be sorry for being myself.”

This is the moment a gay student at one of Sydney’s most elite Catholic schools – that boasts former prime minister Tony Abbott and Barnaby Joyce among its alumni – stood up in a packed assembly hall of more than 1,500 students and came out pic.twitter.com/NyZxffFBmr

He continued by explaining how he told someone he was gay for the first time when he was 13-years-old. After he told his parents he was gay, Stannard said he was met with love and grace.

However, Stannard said he hid his true self at school in fear that he would never be accepted.

“Announcing yourself to the world is pretty terrifying because … what if the world doesn’t like you?” Stannard said.

But he said he mustered up the courage to reveal his sexuality at his keynote address as he didn’t want anyone else to feel the same “feeling of loss” he went through.

The principal of the school, Paul Hines, said Finn’s speech was a “watershed” moment.

“I’m not sure anyone chooses their sexuality, that’s who they are and therefore we need to be open to that and to accept it and to make sure we live in communities of inclusion—and with that will come diversity,” Hines said.