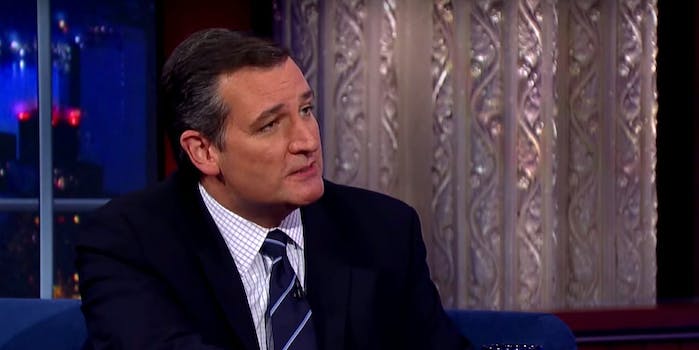 Cruz and other conservatives don't like to talk about these parts of Reagan's presidency.

The Republican presidential candidates adore former President Ronald Reagan, even name-dropping him multiple times during last week’s presidential debates at his library. But Stephen Colbert is more than prepared to put Reagan’s not-so-modern-Republican side on full display.

As Colbert reminded Monday night’s Late Show guest, Sen. Ted Cruz (R-Texas), Reagan raised taxes and supported what Cruz would call an “amnesty” program for undocumented immigrants. Colbert pointed out to Cruz, a self-proclaimed Reagan fanboy, that these facts would bar Reagan from getting the GOP nomination today.

While Cruz focused more on the more GOP-friendly aspects of Reagan’s legacy—mainly that he also lowered taxes—Colbert tried to get him to answer one question: Would he, like his hero, be willing to compromise if his tax plans didn’t work?

Politicians might be flocking to appear on The Late Show, but that doesn’t mean Colbert will always take it easy on them.