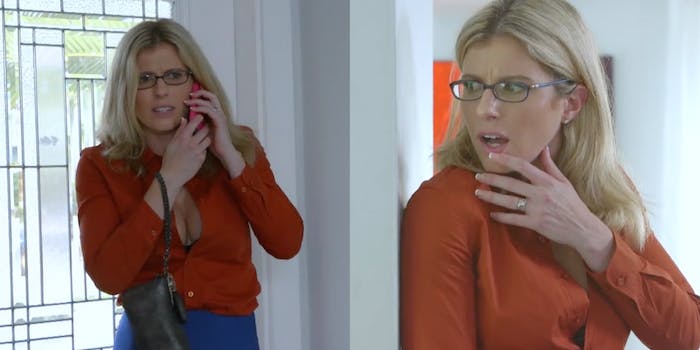 One isn't surprised that Cruz is a hypocrite—though she leans Republican herself.

In the late hours of Monday night, the Twitter account of Sen. Ted Cruz (R-Tex.) liked a tweet. A not-safe-for-work tweet. A two-minute-long clip of pornography in which two adults have sex as a third watches on. You know, that kind of tweet.

Despite the impression the liked tweet has made on Tuesday’s news cycle, the Cruz camp has long since un-liked said tweet and responded to the commotion that a politician as anti-masturbation as Cruz might actually be jerkin’ it on the down low.

However, several questions remain unanswered, including: Who on Cruz’s team, if not Cruz himself, is responsible for the “staffing issue” that allowed his account to like the tweet? How did said tweet appear on Cruz’s timeline on the first place? And who exactly is behind the pornography clip? (For reference, here’s the NSFW video.)

While Cruz’s team has legitimately launched an internal investigation to determine who took free reign of the Twitter account, we can answer the latter of the questions ourselves with some shallow internet diving.

While Chase was unaware of Cruz’s anti-masturbation tirade, she said she wasn’t surprised, as “most politicians are hypocrites.” (Chase says she’s moderate, though leans Republican.)

“I didn’t like that he watched it for free,” Chase told HuffPost. “He pirated that video. He should have paid Reality Kings for a subscription.”

Though Chase identified the other woman in the video as Avalon Heart, Pornhub’s video identifies her as actress Kacey Jordan, whose Twitter bio says she now goes by Daveney Nicole. Nicole’s Twitter account is absent from any indication that she’s aware of the video’s virality, and her Instagram is private.

However, Nicole’s male costar Bruce Venture, a self-described “saint” and producer, among other things, has milked the attention to Cruz’s Twitter activity since daybreak. (Chase, Nicole, and Venture have not responded to a request for comment from the Daily Dot.)