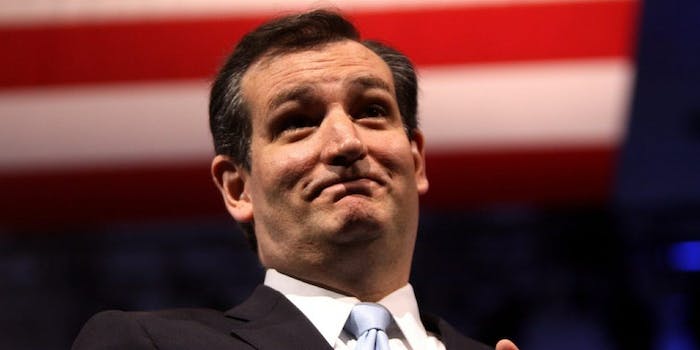 What Cruz was thinking about while he was 'flipping porkchops' with Ellen Page.

On the same day last week that Republican presidential candidate Ted Cruz had a high-profile argument with lesbian actress Ellen Page at the Iowa State Fair, Cruz also sat down for an interview with Ed Berliner on Newsmax.

When Berliner asks Cruz to respond to the GOP’s general reputation as a group that “does not like homosexuals” and is anti-gay, Cruz’s response starts and finishes with the Bible—but in the middle he veers off into confused tangents about gay floral designers, liberal fascism, and forcing imams to officiate at Jewish weddings.

“Well, you know Ed, I’m a Christian,” Cruz says. “And scripture commands Christians to love everybody.”

“An analogy that I used with Miss Page today as we were flipping porkchops, I said listen, imagine if this were inverted. Imagine if there were a gay florist—and now I know that’s hard to imagine, a gay florist, but let’s just go with the hypo for a second—imagine if two evangelical Christians came to a gay florist and they wanted to get married. And the florist said, you know what, I disagree with your faith. I have problems with your faith. You have no entitlement to force that gay florist to provide flowers at the Christians’ wedding. We are a pluralistic nation that tolerates diversity. We don’t have any right to force a Jewish rabbi to conduct a Christian wedding ceremony. We don’t have any right to force a Muslim Imam to conduct a Jewish wedding ceremony. And what we’re seeing right now is this liberal fascism and intolerance, where their object is to persecute, to punish, to fine any Bible-following Christian believer that believes in the biblical definition of marriage as the union of one man and one woman.”

But Cruz’s understanding of the difference between religious freedom law and laws affecting public accommodations isn’t very presidential. Religious leaders are most definitely not forced to marry anyone under the law, not even people in their own religious orders. But laws like the 1964 Civil Rights Act do mandate that businesses (which are legally classified as “public accommodations” along with parks, bathrooms, etc.) serve everyone equally regardless of race, color, gender, national origin, or, and here’s the big one: religion. Maybe Cruz doesn’t know how U.S. law works because he’s from Canada? It’s unclear.

Most states in the U.S. do not extend that kind of civil rights protection to LGBT people. But a new law introduced in July, the Equality Act of 2015, would amend the Civil Rights Act to include sexual orientation and gender identity among the protected classes stated above.