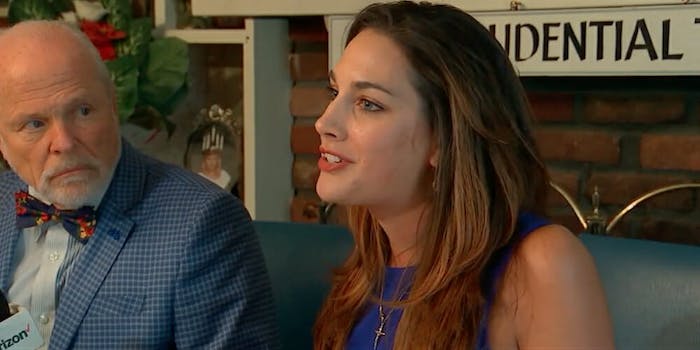 'If a male teacher’s nipples were being displayed, there would be no punishment.'

A New York teacher was fired after her topless photo was shared with her students without her consent. The teacher, Lauren Miranda, is now suing the school for $3 million on the grounds of gender discrimination, according to Jezebel.

“If a male teacher’s nipples were being displayed, there would be no punishment,” Miranda said, according to Jezebel.

Miranda sent the photo to her then-boyfriend in 2016 and doesn’t know how her students were able to see it. The ex-boyfriend was also once a teacher in the same school district.

“Long ago, she sent her topless unremarkable selfie to her companion, never to anyone else. By unknown means, a student obtained it,” Miranda’s lawyer, John Ray, wrote in a press statement. “The school district took possession of it, excoriated her, and fired her because her breasts were displayed. This would never have happened to a male teacher.”

Miranda’s photo was shown at a meeting where school officials discussed the matter.

“They displayed in full color, with all the men in the room sitting there, her photograph and said, ‘Ha! This is the picture,’” Ray said.

When the photo first surfaced, Miranda was placed on a three-month administrative leave in January, and then she was terminated.

“My career has been ruined, my reputation has been tarnished, I have been stigmatized,” Miranda said, according to the Washington Post. “Everything I have worked so hard for since I was 18 years old has been stolen from me because of one innocuous selfie.”

Through her attorney, Miranda is asking for her job back or $3 million in damages.