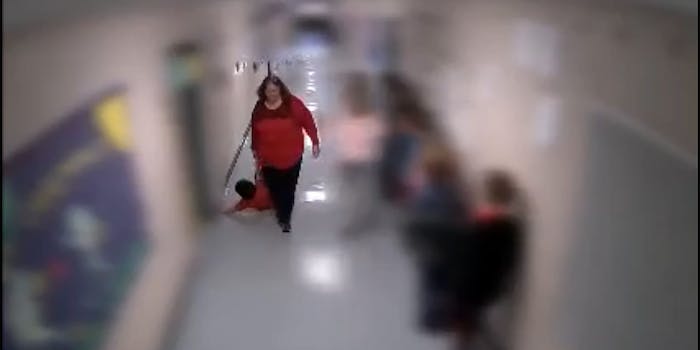 'My son was in pain, and everyone let him down that day.'

A teacher in Greenup County, Kentucky, has reportedly been fired after a video showed her dragging a 9-year-old boy with autism across the floor through a school corridor.

On Sunday, the boy’s mother, Angel Nelson, shared the video of the incident from Oct. 24, taken from security cameras at Wurtland Elementary School, and wrote that her son has a possible fractured left wrist as a result of the abuse.

The teacher has been identified Trina Abrams and was reportedly in charge of the school’s special needs program. In a Facebook post, Nelson detailed the abuse of her son, who has numerous diagnoses including autism, ADHD, and PTSD.

“Mrs. Abrams forcefully grabbed my son by the wrist and bent it backward while he was experiencing a meltdown (which he sometimes experiences as part of his diagnoses). After he let go of the chair, she grabbed him by the wrist and drug him down the hallway from one classroom into another,” she wrote on Facebook. She added that her son said Abrams also threw him down hard onto a chair.

She also said that because the camera in the classroom was “turned toward a corner” and because of his speech limitations, she doesn’t have any way of knowing what happened after that, or if any other forms of abuse took place.

Nelson told the Daily Dot she got word of the incident from the principal, but didn’t see the video until her lawyer subpoenaed it from the school. “The school seemed very apologetic, but there were so many questions left unanswered,” she said. “My son was in pain, and everyone let him down that day.”

The Greenup County School District announced on Monday that Abrams has been fired. She is scheduled to be arraigned on Wednesday and charged with fourth-degree assault, according to local station WSAZ3.

“This was the same lady that looked us straight in the eye and said, ‘Listen, your son is safe with me, I’ve got several years of experience, he’s safe,’” the boy’s stepfather told WSAZ3.

Nelson and her family had just moved to Wurtland weeks before the incident. She told the Daily Dot that she has since transferred her son to a new school. “He seems to be adapting but is still reluctant,” she said.