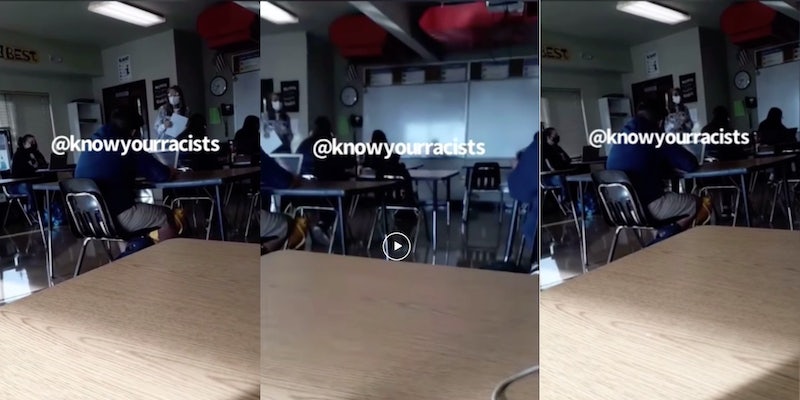 'They were paid to do violence so that the Trump supporters would look bad.'

A central Florida teacher is vying for the elusive title of “worst educator of the year” after she was caught on video spreading misinformation about the Capitol riot in the classroom.

The video was recorded by a student and shared online, where it eventually spread to Reddit. It rose to the top of both r/worldnewsvideo and r/PublicFreakout, racking up thousands of upvotes and comments.

The clip, which lasts just over two minutes, begins after the teacher has already started her rant. The students—which many commenters said were in eighth grade—sit socially distanced at their desks as their teacher launches into a bonkers diatribe about the Capitol riot.

“The supporters arrived, and suddenly there was violence. Already, three of those have been identified as antifa members that were in the building,” the teacher incorrectly states.

This lie has been parroted by numerous Republican politicians, including Rep. Matt Gaetz (R-Fla.). The FBI has said there is “no indication” that any antifa members were among the pro-Trump rioters who stormed the Capitol last Wednesday.

“We’ve had trouble with this all summer long,” the teacher continues, ignoring a question from one of her students. “There are peaceful demonstrations, we’re fine, until a bunch of antifa members showed up and started violence. This is just another example. They were paid to be there, they were paid to do violence so that the Trump supporters would look bad.”

During a brief pause in the teacher’s baffling false narrative, the student filming pipes up with a question: “Well, didn’t Proud Boys and Trump supporters, weren’t they the ones who broke into the Capitol?”

The teacher immediately jumps to the defensive.

“No,” she blurts out, cutting off the student’s final words. “In fact, there’s video showing Trump supporters trying to stop the people breaking windows.”

The courageous student speaks up again, noting that most of the people seen breaching the Capitol were “wearing MAGA hats.”

“Anybody can put on a MAGA hat,” the teacher fires back. “When they’re paid to be there and cause a riot, they want to make it look like Trump supporters, so they wear Trump hats and carry Trump flags. Does that make them Trump supporters? No.”

The teacher misses the fact that her logic can easily be flipped. If antifa secret agents could have disguised themselves as Trump supporters, then Trump supporters could have easily masqueraded as antifa infiltrators who worked to stem the violence.

Instead of pausing to reflect on this flawed logic, the teacher presses on. After telling her students they need to “look at the history,” she delves even deeper into conspiracy theories.

“People have said that this was an attempt to overthrow the government,” she says, again speaking over another student who attempts to ask a question. “Show me the video where those thousands of supporters were carrying guns or weapons of any kind.”

Several students attempt to cut in at this point, noting that the teacher is touting her opinions as fact. She hardly misses a beat, however, before diving into perhaps the most absurd portion of her argument.

“You cannot have a government overthrow without guns,” the teacher says.

Apparently, this educator has never heard of a “soft coup,” which is an attempt to overthrow the government without the use of violence.

The video was particularly upsetting to many viewers because it involved a teacher. Students are brought up to believe teachers, who ostensibly provide young people with the tools they need to succeed in life. When they abuse their privileged position to spread lies and spread conspiracy theories, they are ruining the reputation of teachers everywhere.

Commenters tore into the teacher for discussing politics with middle school students and sharing such egregious falsehoods. Many hoped the woman was promptly fired after the video was shared.

“I think someone needs a review from the board of education,” the top comment on r/PublicFreakout reads.

But according to an Instagram comment on the video, the subject of the video is actually a retired teacher who has since been working as a substitute.

While user @mommabearmolly was unable to disclose the teacher’s name or the name of the school, they did confirm that “it has been handled.” Many commenters took this as confirmation that the teacher had been fired.

Other commenters commended the students for speaking up against their teacher’s lies about the Capitol riot.

“I’m really impressed that those kids spoke up and didn’t let her lies go unquestioned,” one commenter wrote. “Good for them.”

While viewers roundly condemned the teacher for pushing her own politics and spreading conspiracy theories in the classroom, the video did have one silver lining—at least she was wearing a mask.