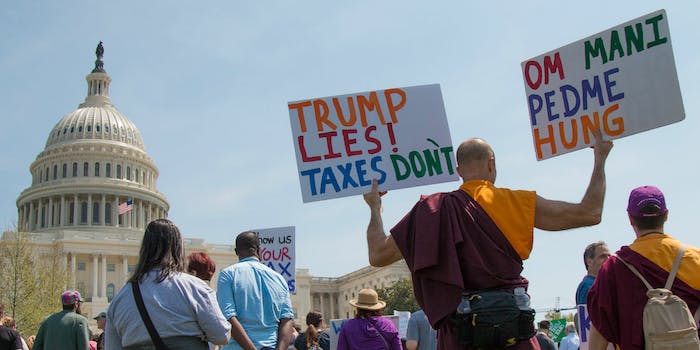 ‘No one is paying me to be here’: The Tax March in 29 photos

Thousands gathered in Washington, D.C., for the Tax March on Saturday, demanding the release of President Trump's tax returns and greater transparency from his administration.

President Donald Trump tweeted early Sunday morning that someone “should look into who paid for the small organized rallies yesterday,” referring to the protests that took place across the country, demanding the release of his tax returns. The Facebook group Tax March claimed over 120,000 people showed to rallies in roughly 200 cities on Saturday, providing a compelling counterpoint to Trump’s claim that only reporters care about his tax disclosures.

In Washington, D.C., thousands met at the U.S. Capitol, then marched to the Trump International Hotel and around the Washington Monument. They were ordinary citizens, concerned about the direction of our country, the president’s agenda, and his potential conflicts of interest.

“I’m outraged with everything to do with Donald Trump,” Colleen from Fairfax, Virginia, told the Daily Dot. “There’s just so much smoke, smoke, smoke everywhere, and you’re going to tell me there’s no fire? Something serious has gone on and I’m going to fight every step of the way. I’m not OK with this.”

“He is not transparent,” one protester from D.C., who asked to remain anonymous, added. “He just closed the books on visitors into the White House… That is very undemocratic for the United States. He’s against all our values.”

Here are some of the other people we met, some of whom made it clear they were not being paid to protest.

“I’m concerned about what all of his business interests are because there are potentially a lot of conflicts of interest.”
Advertisement Hide

“After the election in 2016, like a lot of people, I woke up and I was devastated, and I thought I needed to do something to take back our government. Since then I’ve been doing everything I can. I joined a group, and our little group joined a bigger group, and we are getting very active, as many of us are. I think it’s so important to ensure that the democratic process works, and I’m grateful for the opportunity to help do my part.”
Advertisement Hide

If you want to know who’s behind the protests, just look at their signs—and ask them.