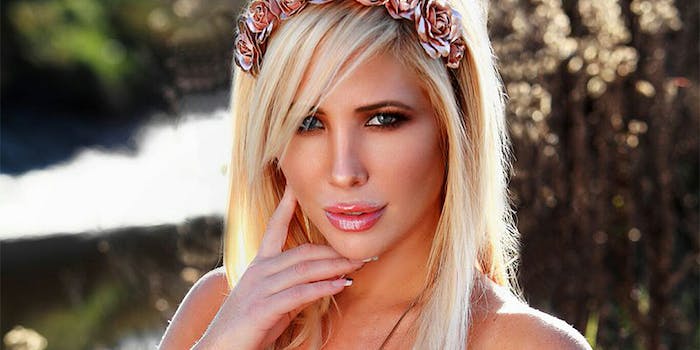 Reign told the Daily Beast she was filling out paperwork for the film The Set Up, on November 15, when she felt two hands grab her rear from behind and heard sexual moaning noises. She realized her scene partner, Michael Vegas, was in the other room and didn’t know who was behind her. The film was produced by Wicked Pictures and directed by Daniels, who suing President Donald Trump for silencing her over their alleged affair in 2006.

“So I turn around and it’s a crewmember from set. I look him directly in the eye and go, ‘What the fuck are you doing?’ and I look so upset. So I thought, OK, I can either ruin my makeup, which took an hour and a half to do, or I can go do my scene as quickly as it’s going to take and then as soon as it’s over, I can go and confront Stormy, the director who has all the power that day on set, and the man that did this to me,” Reign told the publication.

She said after filming the scene, she began crying and immediately confronted Daniels and her crew member in the hallway, recounting to them both the groping and sexual noises. Reign said the man began making excuses, saying he was “just trying to get through” the space they were in and that the noises were “a joke.”

“I said, ‘That’s sexual harassment and assault. If you don’t know that, that’s a problem.’ Stormy is there, and she’s totally silent. Just neutral. Which is such a problem,” Reign said. “He says sorry, starts talking about how he has a family—which all men do when they get accused.”

Reign said Daniels then asked her if she needed to go into the next room to calm down. Daniels followed her into the room, told Reign she was sorry, gave her a hug, then shamed her for calling out her alleged abuser, who has not been named in the Daily Beast report.

“‘You probably made him cry. He’s crying right now,'” Reign said Daniels told her. “And I thought, wow, I’ve lost all respect for you, and I’m also immediately calling your producer and your company and telling them exactly what occurred.”

Orenstein then told Reign in an email that the assault was “resolved” because the crew member was only hired because he was a part of Daniels’ team, and since she was no longer working there, he wouldn’t be either. Reign said she hasn’t heard any followup about the report for the past two months.

Reign first brought her account forward publicly in January when she tweeted at Daniels about her assault.

Are you kidding? Please don’t get me started about the environment on your set. No one thinks all men are monsters. Women are finally able to speak their truth about sexual harassment. Not supporting this movement speaks volumes to misogyny. Our industry is no exception. #Metoo

I was innapropriately groped and sexually harassed by one of the men on your crew November 15th right before my BG scene. Which you were then made aware of that day. You continued to allow him to stay on the set with no reprocussion. I never questioned your directorial skills.

You were not. I was right there…as were several other people and NONE of them will agree with you. How dare you try to undo 15 years of my reputation and his career. I will not allow it. Find me one person who will state otherwise. Best wishes

When approached for comment, Wicked Pictures told the Daily Beast, “We have been and are appropriately investigating.” A lawyer for Daniels stated that her recollection of the events are “vastly different.”

“Further, after the incident in question, Wicked performed a thorough investigation and found no substantiation for the allegations. It simply did not occur as Ms. Reign suggests,” the statement from Daniels’ lawyer read.

Since her alleged affair with Trump first made headlines in January, Daniels has continuously spoken out against being intimidated and forced into silence by the president and his lawyer Michael Cohen, but has maintained the alleged affair was “not a Me Too thing. I am not a victim.”

Reign says she’s still deciding her “next steps” with her lawyer. She said she’s “not after money,” but wants Wicked Pictures and Daniels to recognize what occurred, and issue new protocols on set.