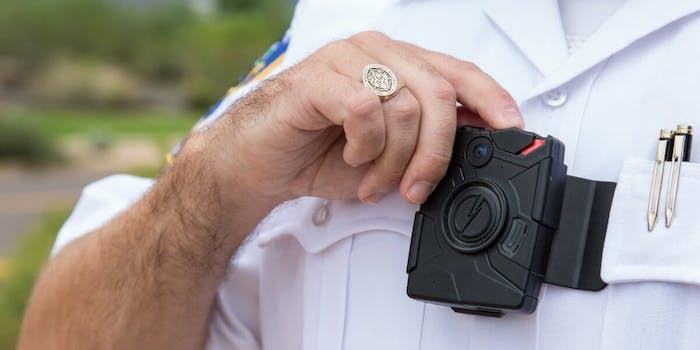 TASER is now Axon and is offering every officer a free one-year trial camera. Is there a drawback?

Controversial police tool manufacturer TASER, whose eponymous electroshock weapon evokes, for many, images of police brutality and excessive force, is rebranding itself as a law enforcement surveillance company.

TASER is now called Axon, named after one of its police body cameras, the company announced Wednesday. It will offer any police officer a one-year free trial use of its cameras, part of a push to emphasize its cameras and data management technology.

“I started as a 23-year-old idealist working in an inventor’s garage in Tucson, desperate to bring to market the technology that would become our TASER weapons,” CEO Rick Smith wrote in a note to customers posted on the company’s website on Wednesday. “I couldn’t have predicted how our product and the company itself would evolve, but I’m incredibly proud of how it has. 23 years and 180,000 lives saved later, I’m more excited than ever by our mission to protect life and the impact we can continue to make in the world with our broader mission as Axon.”

In December of 2014, after police officers controversially shot and killed two unarmed black men — Eric Garner in New York City and Michael Brown in Ferguson, Missouri — the Obama administration asked Congress to allocate more than $250 million in federal funds for law enforcement agencies across the country to buy body cameras and develop a system to record interactions with civilians.

The following May, the Justice Department announced that the federal government would provide $75 million to local law enforcement agencies to purchase 50,000 cameras over a three-year period. The first wave of funding was dispersed in September of 2015 — $20 million was granted to several law enforcement agencies across the country, $17 million of which was for the purchase of body-worn cameras, with the remaining money allocated to technical assistance, training, and evaluation tools.

All the while, TASER was cleaning up — between 2013 and 2015, the company’s revenue soared from about $6 million to $37 million, according to records provided by TASER. One of the company’s biggest growth spots was licensing for its Evidence.com data management software, a vital companion to any cop using one of the company’s cameras. Between 2015 and 2016, TASER saw licenses for Evidence.com grow from 27,000 to 132,000, and that number is expected continue climbing as more law enforcement agencies invest in body cameras.

“When you compare [Evidence.com] to anything else out there, you see that you’re getting an ecosystem that allows [police officers] to manage and store anything from photos to video to word docs — all the evidence for their cases in one place,” Steve Tuttle, the company’s vice president of strategic communications, told Vocativ for a previous article. “Most of these agencies, when they see the price, there isn’t a sticker shock. They say, ‘I can’t afford not to have these.’”

Police generally like the idea of body cameras — Vocativ has spoken with dozens of law enforcement officers in our coverage of TASER and police body cameras and we were hard-pressed to find one who opposed them.

“I have seen [body cams] save the officer’s butt more than once when a complaint comes in,” one New York State trooper previously said. “If you are doing your job correctly there’s no reason to care if you are wearing one or not.”

Others, however, note potential privacy concerns, especially as Smith is an open proponent of combining police cameras with real-time analytics, like facial recognition software.

“Body cams are also systems of surveillance. They record the public, gather evidence, and are concentrated in our communities of color,” Harlan Yu, a technologist at Upturn, a think tank that specializes in technology, policy, and social issues, posted to Twitter.

“If departments want to take TASER up on their offer, they’d better first think through the hard policy trade-offs that come with cameras,” Yu said.