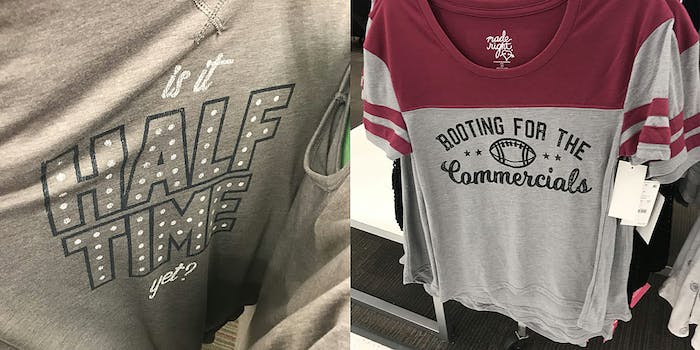 In the trail-blazing year of 2018, Target is capitalizing on the cliché of the female football fan with a collection of shirts telling women just how dumb and disinterested they really are when it comes to the game.

Becky Tallent, Director of U.S. Government Affair for Dropbox, tweeted three photos of shirts from the collection, which have phrases that assume women don’t know the terminology of sports enough to separate football from baseball. The series of shirts also assumes women are waiting for the commercials rather than watching the plays.

Whether or not those descriptions fit an individual shopper, the collection alienates an entire group of women who actually do care about the game.

The company tweeted Tallent a response assuring her the merchandise team was reviewing their decision to release the shirts. But it is unclear how many locations have the sexist shirts in their stores.

We appreciate you reaching out to us. It's never our intention to offend our guests with the merchandise we carry. We have documented and will share your feedback with the Merchandise team for further review.

Some Twitter users are defending Tallent and expressing anger toward the branding decision.

A Twitter user rejected Tallent’s issue with the company and said it was not one of “real equality,” telling her to “let it go.” But others are making it aware that women can take on big issues in sexism as well as small.

hey Lou, I'm here to let you know that some of us can walk AND chew gum at the same time, because I'm worried that you didn't realize that some people can do that

This is not the first time Target has been in hot water for its sexist branding. According to New York Daily News, Target was under fire in 2015 for a shirt that said nothing but “Trophy” in huge letters across the front. Not only was the shirt marketed to women, but it was also in the juniors’ section. Target’s response included a statement that said, “These shirts are intended as a fun wink and we have received an overwhelmingly positive response from our guests.”

The question of the shirts brings on a bigger debate about who decides where to draw the line, whether it’s the company or the consumers themselves. In an article by AdWeek, 3% Conference CEO Kat Gordon said, “[Agencies and brands need to] first have diverse people making the ads. Gendered depictions will self-correct. Second, have ad agencies amend their creative briefs with language about how stereotypical depictions of women—or anyone for that matter—are just as off-brand as using the wrong logo in an ad. Address stereotypes at the kick-off meeting, instead of months—and millions of dollars—later.”

In an age where merchandisers are getting feedback about their ideas almost instantly with the help of social media, the consumer is taking on more and more of a role to get companies’ attention about what is acceptable and what isn’t.

But, why in 2018 are women still having to speak up about something like this? Come on Target, let’s leave those sexist shirts in 2017.

Update 3:40pm CT, Jan. 26, 2017: A Target spokesperson tells the Daily Dot that the company has decided to remove the shirts from stores and it appreciates the feedback from shoppers.