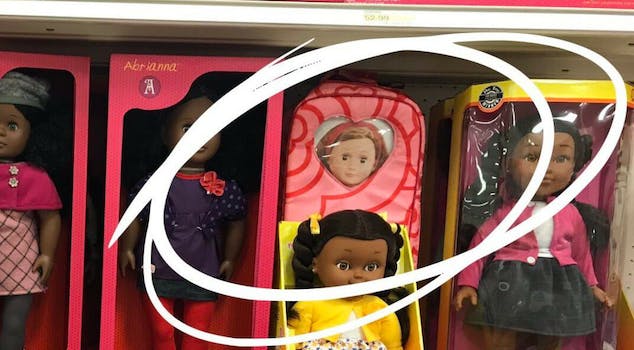 Baby dolls have long come up in discussions about race.

The famous but controversial doll test—where kids are shown Black and white dolls to test their perceptions of race—is still used as shorthand for the argument that racism is internalized early. Toy companies have picked up on consumers’ desire for more diverse dolls, and it’s easier than it used to be for parents to find Black, Latino, or Asian dolls. But it’s not like the white dolls have vanished.

So when one user complained that she couldn’t find any white dolls at Target, Twitter didn’t buy it.

User @thetaclair posted a photo Aug. 5 of dolls at a Target, saying she “couldn’t find a doll” for her cousin’s birthday present. “BUT I did find dolls named Abrianna, Anaya, Maeva and Keisha,” she wrote. She tagged the retail chain with a sarcastic “thanks.”

Skeptics were quick to debunk the claim.

Uh, then who tf is that? pic.twitter.com/eSlsdpGUAA

Seriously, they don't put dolls on their side on the bottom shelf. She took every black doll she could find & it didn't even fill 1 shelf.

@holliesplaining took her own video of the dolls on a Target’s shelves. There doesn’t seem to be any lack of white dolls there.

Even if there weren’t white dolls at Target (which there certainly are), what’s the big deal? One user pointed out that children of color have been playing with white dolls pretty much forever.

I've been playing with mayo dolls my whole childhood. The girl will live.

And as far as Clair’s cousin… Well, Twitter didn’t buy that story, either.

Wait… Why do you think Brock would want a doll? That's some weird shit. pic.twitter.com/xj1ONujJp0

Whatever, Clove. No one likes you, probably not even your made up cousin.

“I find it quite revealing that you desire publishing something that will anger people at such a sensitive time. You are Fake News,” she added.

Update 2:00pm CT, Aug. 18: The photo of dolls at Target might not be the only fishy thing about @thetaclair.

BuzzFeed reported Friday that the entire Twitter account @thetaclair could be fake. The photo of the user’s “cousin Brock” is actually of @TomHZL, who told BuzzFeed he doesn’t know who Brock nor @thetaclair are.

Liz Appel Rinck, director of communications for Kappa Alpha Theta (the sorority in @thetaclair‘s Twitter handle), also confirmed to BuzzFeed that the owner of the account has no ties to their chapter.

“@thetaclair is one of a handful of seemingly phony Twitter accounts that use images and stereotypes of white women to promote pro-Trump, anti-feminist, white nationalist, white supremacist, and/or neo-Nazi rhetoric,” BuzzFeed reported.

“Her account is a part of botnet,” he told Daily Dot.

Accounts in the botnet, short for robot network, are run by software and designed to promote certain messages.

Shevtsov said the @thetaclair account is followed by @MicroChunkyChip, “one of the cores of pro-Trump Twitter Cyber factories.”