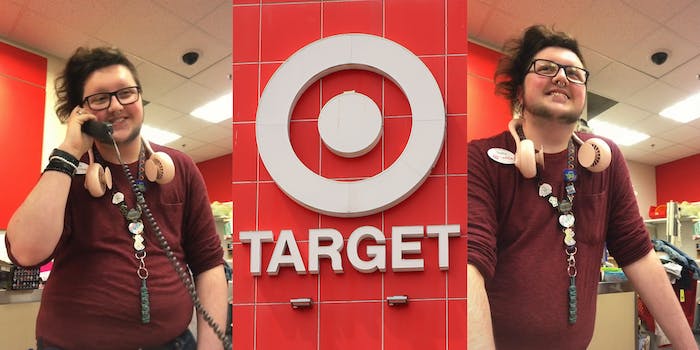 ‘This felt like the end of a movie and I love it’: Target employee makes final announcement during last shift (updated)

'Why did that make me kinda emotional?'

A former Target employee’s heartwarming sendoff to his job went viral this week after a video of the event was posted on TikTok.

In the video, employee Dusty (@discoverwithdusty) gives an emotional final announcement before doing something he says he’s “always wanted to do”—play “Closing Time” by Semisonic over the PA system.

“Attention Target guests and team members! The time is now 10 o’clock and the store is closed,” Dusty starts.

After a little more store information, he says, “For those of you who don’t know, I’ve worked here for three years and tonight is my last night at Target. That makes this the last announcement I’ll ever make. I’ll really miss all my awesome co-workers, but I’m moving on to bigger and better things… Hope you all have a wonderful night, stay safe, and don’t forget to stay hydrated.”

“Now to do something I’ve always wanted to do,” he concludes. At this point, he holds the microphone up to a Bluetooth speaker, which is playing Semisonic’s hit song “Closing Time.”

In comments, users remarked on the cinematic and moving nature of his sendoff.

“This felt like the end of a movie and I love it,” wrote a user.

“If this happened while i was somewhere i would find you and hug you,” added another. “This is great.”

“I thought you were going to cuss them out but this was SUCH a better ending,” a third stated. “Good luck on your new adventures.”

“Why did that make me kinda emotional?” a further user asked.

In comments, Dusty explained that he worked in “reshop,” which sorts merchandise that is out of place within the store. While he enjoyed his co-workers, he notes that, among other things, the job simply became too much to handle.

“Constantly understaffed and overworked,” he explains.

No matter where Dusty ends up now, TikTokers are wishing him good luck and thanking him for making such a pleasant video.

“I didn’t know where this was going and it ended up being the wholesome video of the day,” stated a user.

Update 11am CT, June 1: When speaking with the Daily Dot, Dusty clarified he was a Guest Service Advocate, which he said is “Target’s word for customer service.”

“Things have been a rollercoaster since I left Target,” he said. “The transition to a new job in a new field has been a big learning curve, and I’m surrounded by people I don’t know and don’t really trust yet so it’s been hard at times. I miss my old coworkers and team leads and the rapport we had. Starting from scratch with a whole new team is rough.”

While Dusty said he is still learning the ropes in his new position, he said there were many factors that pushed him away from continuing a career at Target.

“Constantly overworked and understaffed about sums up the gist of it, but there were many reasons,” he said of his reasons for leaving. “Hardly anyone stayed there for much longer than a few months before quitting due to how insane the workload was for the pay we received. It was physically impossible to keep up with, especially since we were often left with only one employee per department. I’d have a solid handful of favorite coworkers and team leads and they’d all quit one by one due to the stress and workload (not to mention aggression, harassment, stalking, and straight up violence from the “guests”), then we’d get new people and I’d eventually develop new friendships only for them to quit soon after too. By the time I finally quit after 3 years, I had more seniority at that store than anyone who was left, except maybe two employees. I’d stuck around longer than any of the team leads, ETLs, store director, or anyone in HR. And one of the biggest reasons I decided to leave was that despite being given ‘one of the biggest raises in the whole store,’ I was still only being paid 30 cents more than the current starting wage.”

“That’s all often a sad reality of working in the US but it still just didn’t sit right with me,” he added.

Today, Dusty is “pursuing a career in healthcare.”

“I’m currently a Caregiver/Med Tech trainee at an assisted living facility for seniors, with plans to eventually move to Norway and become a nurse,” he told Daily Dot. “The goal is to eventually have an emotionally fulfilling job where I directly help people in life-changing ways, and that pays well enough for me to work fewer hours so I have more time to pursue my passions of making art and music.”