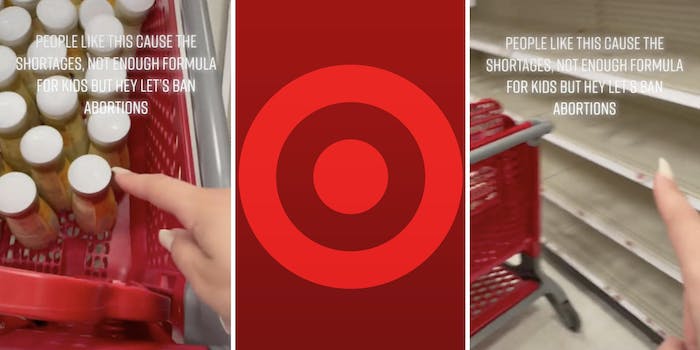 ‘You have a whole cart!’: Shopper confronts woman for cart full of baby formula at Target

A TikTok showing a woman interrogating another woman at Target after she allegedly cleared out an aisle of baby formula has gone viral and sparked considerable discussion on the platform.

The video, posted by user @chopnedits, shows a woman (who @chopnedits claims is his younger sister and a first time mother) questioning another woman about her whole cart’s worth of formula.

This TikTok currently has over 2.2 million views.

“You have a whole cart! Look at this!” the woman says in the video.

“But I need it for my baby!” the other woman responds.

“You don’t think I need it for my baby, too?” the woman answers.

Their interaction goes back and forth over the course of the video, with the baby formula purchaser never relenting or offering the woman some of her baby formula.

“People like this cause the shortages,” the text overlaying the video reads. “Not enough formula for kids but hey lets ban abortions.”

@chopnedits later posted the full video from the interaction.

While buyouts like these are reportedly contributing in part to people’s inability to purchase baby formula, there are bigger reasons as to why people are finding it so difficult to find baby formula in America today.

One company, Abbott, accounts for 40% of formula production in the United States, per Time. In February, the company issued a recall of three popular infant formulas “after a type of bacteria linked to the hospitalization and death of several babies was found in [one of the company’s plants],” Time reported. Abbott has reportedly denied that there is conclusive evidence linking this bacteria and the illnesses and deaths.

However, Abbott was accused of being aware of issues with its production prior to February. Salon reported that a whistleblower filing dated Oct. 19, 2021 observed many issues with the plant, including faulty equipment that could lead to an outbreak of bacteria.

“A number of product flow pipes were pitting and leaving pin holes,” reads the complaint, quoted by Salon. “This allowed bacteria to enter the system and, at times, led to bacteria not being adequately cleaned out in clean-in-place (‘CIP’) washes. This, in turn, caused product flowing through the pipes to pick up the bacteria that was trapped in the defective areas of the pipe.”

A footnote, also quoted by Salon, details that the “complainant was advised by an operator that leadership at the Sturgis site was aware of the failing equipment anywhere from five to seven years from the [bacteria outbreak] occurring.”

Despite these issues that the complaint alleges could have been resolved through repairs and replacement of parts, Abbott reportedly did not spend the money needed to repair them. The company, which the Guardian reported had “net profits soar[ing] by 94% between 2019 and 2021,” decided to instead “[increase] dividends to shareholders by over 25% while announcing a stock buyback program worth $5bn.”

On the ground, this means that baby formula is getting substantially more difficult to buy, with no end in sight.

In the comments underneath @chopnedits’ video, users offered their own opinions on why the woman was buying so much formula, and the state of baby formula in the U.S. in general.

“She’s reselling for sure,” a user speculated.

“If there is a shortage there should only be a limit of 4 per customer,” another user shared. “I get time are hard but have respect for others.”

While some said that people should instead breastfeed or find alternatives, as @chopnedits points out in a follow-up video, this isn’t always possible.

“Tell that to a fucking breast cancer survivor that lost both of her breasts, got pregnant, and relies on formula,” he says. “In places where they don’t have limits, if you clear out an entire shelf while there is somebody behind you obviously looking at formula, leave a couple.”

“No woman should have to explain herself on why she does not breastfeed,” a user said. “It’s nobody’s business but hers!”

“Single dads exist too,” another added. “They obviously can’t do nAtUrAl WaYs.”

“Let’s also remember that some kids need formula for serious medical issues too and this is affecting them as well,” a third explained.

The Daily Dot reached out to @chopnedits for comment.