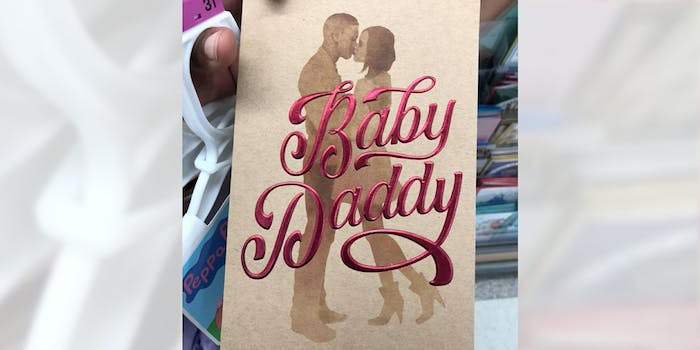 Upset customers want to know why this was the only card featuring a Black couple.

Texas Target customer TaKeisha Saunders, 35, was shopping for a Father’s Day card two weeks ago when she came across an odd turn of phrase for a holiday celebrating fatherhood: “Baby Daddy” in shiny red cursive, with a Black couple kissing on the card’s cover.

It’s strange enough to see the words “baby daddy,” a term varyingly used to describe unwed or absent dads, on a Father’s Day card. However, there was an even bigger problem that Saunders noticed: This was the only Father’s Day card featuring a Black couple.

Saunders’ post has so far been shared over a hundred times, and many others have taken to social media to complain about how it portrays racist stereotypes. Many people have pointed out that this term is often applied to Black fathers even when the father in question absolutely does not fit the traditional definition.

One user reminded people of how Fox News used “baby mama” to describe former First Lady Michelle Obama and has as of yet not done so for President Donald Trump, in spite of him being much closer to the jab Fox was going for. In other words, the term absolutely has a racist colloquial use.

I haven't heard anyone refer to Trump as "Baby Daddy," and he has children by 3 different women. President Obama & Michelle are an educated, married couple, & still they pitifully referred to her as "Baby Mama."

However, many people didn’t see an issue with the card. Some even found it funny, saying they would get the card themselves.

Spokespeople for both the card company and for Target apologized in statements made to BuzzFeed News on Wednesday. Joshua Thomas of Target said, “We were made aware of some concerns about this card last week and are working with our vendor to have it removed from Target stores. We appreciate the feedback and apologize. It’s never our intent to offend any of our guests with the products we sell.”

The spokesperson for American Greetings emphasized the intent of the card in their statement, saying, “This particular card was created for, and addressed to, a loving husband—which the inside copy makes clear. However, we now see that the front page, taken out of context, can communicate an unintentional meaning that we are strongly against perpetuating and is not consistent with our company purpose and values.”