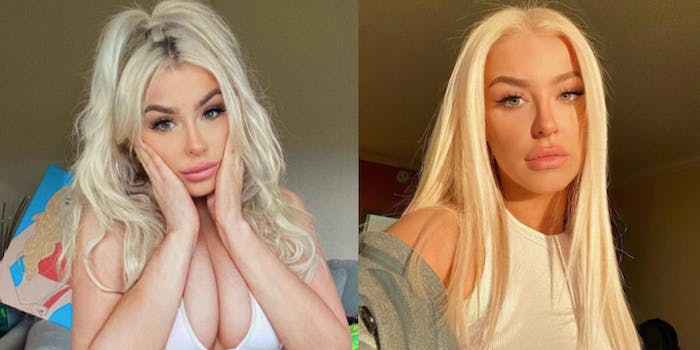 Mongeau says she received over 10,000 messages from Biden voters.

Tana Mongeau is giving away nudes to people who vote for former Vice President Joe Biden in the upcoming presidential election. She claims that after she tweeted out the offer, she received over 10,000 messages from people who proved they were voting for the Democratic nominee.

The YouTuber first made the announcement on Twitter. While the tweet has since been deleted, she reposted another account’s screenshot of it to Instagram. “If you send me proof you voted for Biden I’ll send you a nude for free,” the tweet read, along with the hashtag “BootyForBiden” and a link to her OnlyFans account. Included in her Instagram post is also a borderline NSFW picture of Mongeau featuring Biden’s face Photoshopped over her own.

“Update #bootyforbiden broke tana uncensored,” Mongeau wrote in the caption of the Instagram post. “Love to see so many ppl who want change as badly as [I] do. u don’t need my ass to know what’s right for America so go VOTE! today was fun, ily.”

Mongeau also posted a video to her Instagram Story claiming the “tens of thousands” of messages she’s received broke her DMs. “Tana Uncensored messages are broken, and the point has been made: I got tens of thousands of messages of people telling me that they willingly voted for Joe Biden,” she says in the video. “It’s the best thing ever. You don’t need my a** to make you go vote. So go vote because you wanna see a change in this country just like me, and thank you to everyone who joined me today. Booty for Biden.”

The video has since been reposted to Twitter by others.

Mongeau also posted a video to TikTok in response to a comment that reads: “Trump 2020!!!” Mongeau sarcastically tells the person who left the comment that “my naked body is doing so many things for Biden.”

Mongeau joins the multitude of influencers who are finding creative ways to encourage young people to vote in the upcoming election. David Dobrik, one of YouTube’s biggest stars, is giving away five Teslas to fans who register to vote.