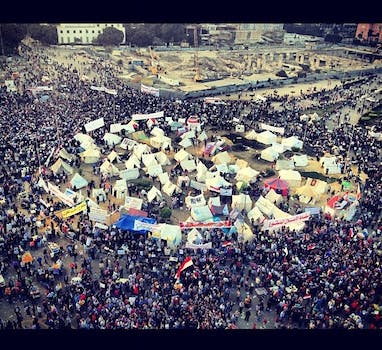 The @TahrirBodyguard Twitter account, started Tuesday morning, aims to recruit volunteers to help those who need protection in Tahrir Square, the focal point for protests in Cairo.

On Thursday, Morsi gave himself increased power and banned courts from challenging his decisions. The move led to many dubbing him the country’s new pharaoh.

Since then, thousands of Egyptians have protested in the streets, with some setting fire to the headquarters of the Muslim Brotherhood—Morsi’s affiliation—in cities throughout the country. Egypt’s highest judges’ body is among those against Morsi’s apparent power grab.

On Tuesday, a mass protest against Morsi’s decree began in Cairo. Around 20,000 people flocked to Tahrir.

Sexual assault and harassment is a major concern for many women wishing to protest. In one incident on Sunday, a mob of men ripped the clothes from three women.

The @TahrirBodyguard account, which had 863 followers as of noon EST Tuesday, hopes that bringing in volunteers to help look after those women will help them make their voices heard more safely and securely.

Declaring that they can’t “stand back and watch another woman being sexually assaulted in Tahrir,” a group of women running the account sought support from high-profile Egyptians such as Wael Ghonim, an activist who played a key role in the Arab Spring revolution.

The women, who did not return a request for comment, specifically started the account after “a woman was too scared to go to Tahrir and fight for what she believes in.” They urged women headed to Tahrir to stay in large groups and avoid wearing tight or flashy clothing.

The group is currently organizing itself and hopes to be fully operational by Friday. It plans to set up a tent and equipment to help protesters identify volunteers. It’s also recruiting and screening volunteers, and in the meantime, it hopes to bring assistance and aid to those who are being assaulted. They claim to be in it for the long haul, aiming to establish a system to help those who need assistance in future protests as well as this one.

The ultimate goal is to bring an end to sexual assaults and harassment so that women can protest in peace. With volunteers helping to protect them, women may feel at least a little safer.