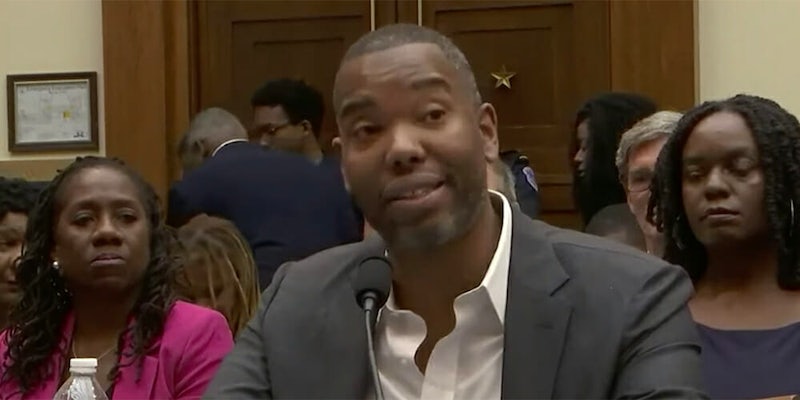 He came with receipts.

“I don’t think reparations for something that happened 150 years ago … is a good idea,” McConnell said Tuesday evening. “We tried to deal with our original sin of slavery by fighting a civil war, by passing landmark civil rights legislation. We elected an African American president. I think we’re always a work in progress in this country but no one currently alive was responsible for that.”

Coates, along with actor Danny Glover and Sen. Cory Booker (D-N.J.), addressed members of the House Judiciary subcommittee on the Constitution, Civil Rights, and Civil Liberties to discuss House Resolution 40. The resolution creates a commission to study and propose possible reparations for slavery, the racial discrimination that followed it, and the continued impact it has on living Black people.

“Yesterday, when asked about reparations, Senate Majority Leader Mitch McConnell offered a familiar reply: America should not be held liable for something that happened 150 years ago since none of us currently alive are responsible,” Coates said to the committee. “This rebuttal proffers a strange theory of governance, that American accounts are somehow bound by the lifetime of its generations.”

Coates listed examples of different ways Americans are part of a “collective enterprise,” not a situation in which they’re able to pick and choose what to be responsible for. For example, we honor treaties and constitutions signed hundreds of years ago, even though none of those of us alive signed them. However, even after the Emancipation Proclamation was issued, Black people were still subjected to horrific oppression afterward, Coates pointed out.

“When (slavery) ended, this country could have extended its hallowed principles—life, liberty, and the pursuit of happiness—to all, regardless of color, but America had other principles in mind,” Coates said. “For a century after the Civil War, Black people were subjected to a relentless campaign of terror, a campaign that extended well into the lifetime of Majority Leader McConnell.”

Coates said while McConnell may not have been alive to witness slavery, he was alive to witness the violence and murders of innocent Black people, such as George Stinney Jr., a 14-year-old Black boy who was wrongfully convicted of murder and executed.

Coates said McConnell was also alive for the attack on Sgt. Isaac Woodard, a Black veteran who was beaten by police so severely that he lost his eyesight.

People on Twitter expressed their thoughts on Coates’ testimony.

And on this day, Congress held a hearing on reparations. A massive crowd showed up for it.

Ta-Nehisi Coates laid out a rebuttal to Sen Mitch McConnell's argument that reparations are not needed. He laid out that black people suffered & continue to suffer impacts of slavery & that McConnell should essentially know better since he was alive for some of the worst of it.

"If Thomas Jefferson matters, so does Sally Hemings" – Ta-Nehisi Coates at the #HR40 committee meeting on #Reparations. pic.twitter.com/c6lUQToLxl

“What they know, what this committee must know, is that while emancipation deadbolted the door against the bandits of America, Jim Crow wedged the windows wide open,” Coates said. “The matter of reparations is one of making amends and direct redress, but it is also a question of citizenship. In H.R. 40, this body has a chance to both make good on its 2009 apology for enslavement, and reject fair-weather patriotism, to say that this nation is both its credits and debits.”