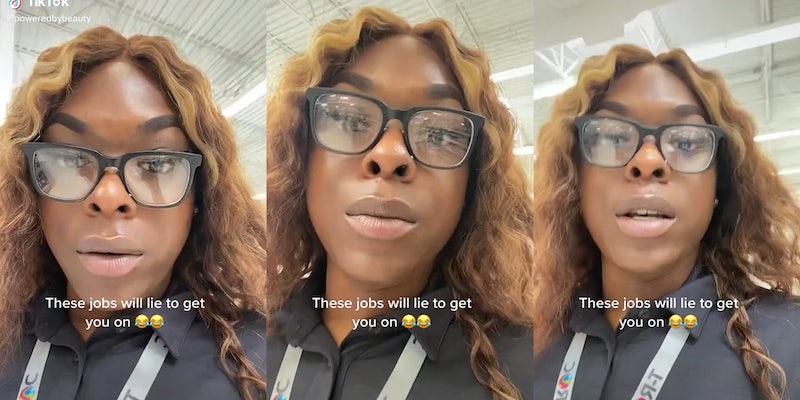 ‘These jobs will lie to get you on’: Worker told that job wasn’t sales-based. It was

'One of the worst companies I’ve ever worked for. RUN!'

While signs indicate the rampant hiring craze may be slowing, that doesn’t mean that employers aren’t still using every trick in the book to get applicants through the door.

In some cases, according to TikToker MaKayla (@poweredbybeauty), this can even include lying.

In a video with over 75,000 views, MaKayla says she applied for the job, she was told it was not commission-focused.

“[When] I first started the job, they said it was not sales-based,” she explains. “Today, I find out it’s sales-based. We’re gonna be looking for something else.”

“These jobs will lie to get you on,” she added in the text overlaying the video.

At the start of the video, MaKayla warns against jobs that do not require an interview.

“There was No interview at all I applied and they called the same day and gave me the job,” she wrote in comments. “I really thought the lord was moving for me lol.”

In the comments section, users claimed they had been similarly deceived during the interview process at similar jobs.

“Express told me it was 12 and it was actually 9 told the manager and she was like ‘do you still want it,’” alleged a second. “A damn mess.”

“They always lying saying it’s not sales,” offered a third.

Many had specific complaints against T-ROC, the company printed on the lanyard visible in the video. One called working for the company “some bull”; another called it “one of the worst” companies they’ve ever worked and urged the worker to “run.” Another alleged they are suing T-ROC after it “abandoned me on shift knowing I had to get to my sick mother.”

“I left almost an hour after I was supposed to get off,” they continued. “They called me and told me not to come back and didn’t pay me. So basically I was punished for not letting them take advantage of me.”

It seems like MaKayla is heeding the warning. In response to someone telling her to “RUN,” she said “I’ll be running lol as soon as I find another job.”

Update 7:50am CT, Oct. 6: In an email to Daily Dot, a T-ROC spokesperson provided the following: “We are disheartened to see this article and TikTok videos published as T-ROC has a longstanding record of being one of the best places to work, as proclaimed by third parties and directly from our group of diverse and extraordinary employees. We spend countless hours on our recruiting strategy and hiring process as we are known for selecting the ultimate candidates for hire. Each job applicant is provided with a detailed description of the position, particularly upon receiving a job offer. Additionally, the health, wellbeing and happiness of our employees is embedded in our company culture.”

“If any employees have a problem or concern, we always encourage them to discuss with leadership. We are working expeditiously to determine who this individual is (as we have no record of an employee with the TikTok name, nor the type of complaint on file) so we can better understand and help the employee be satisfied with T-ROC,” the spokesperson added.

The company also denied having any pending lawsuit matching the details provided by the aforementioned commenter.

The Daily Dot reached out to MaKayla via Instagram direct message.