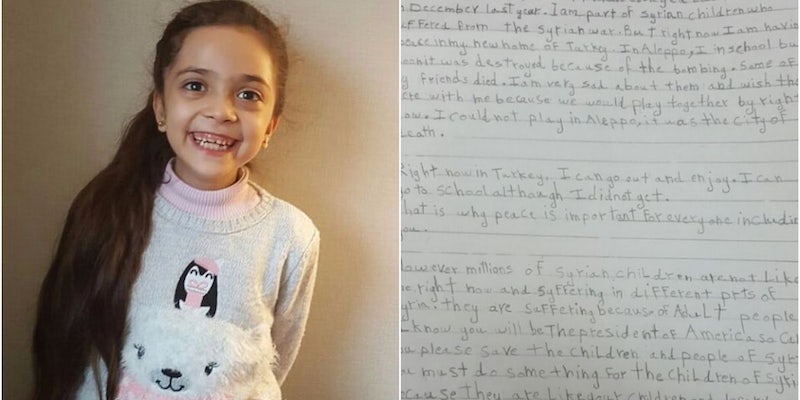 Bana Alabed is begging the president to 'do something about the children in Syria.'

Seven-year-old Syrian girl Bana Alabed, who became known for her Twitter account documenting her family’s life in the besieged city of Aleppo, has written an open letter to President Donald Trump pleading him to “do something for the children of Syria.”

In September, Bana began tweeting almost daily with the help of her mother, Fatemah, about the situation where she lived in East Aleppo, then the center of the bloody Syrian conflict. In December, she and her family were evacuated to Turkey along with thousands of people, after the rebels lost control of the city.

In the letter, which Fatemah shared with the BBC, Bana writes, “You must do something for the children of Syria because they are like your children and deserve peace like you.”

They use to hide from the bombs. We are not hiding anymore. Peace is very new to us & we love everything right now. pic.twitter.com/t9xEoDnjiG

“Right now in Turkey, I can go out and enjoy. I can go to school although I didn’t yet. That is why peace is important for everyone including you,” Bana wrote in the letter.

My letter to @realdonaldtrump: I beg you, can you do something for the children of Syria? If you can, I will be your best friend. Thank you pic.twitter.com/rWmgDuBf6P

On Wednesday, Trump is expected to order a temporary ban on most refugees coming to the U.S., except for religious minorities escaping persecution. According to Reuters, another order will block visas being issued for citizens from Syria, Iraq, Iran, Libya, Somalia, Sudan, and Yemen.

There was initially skepticism over the veracity of the account, but the girl and her mother have given several interviews, including this one with the New York Times.

“If you promise me you will do something for the children of Syria, I am already your new friend,” Bana wrote.