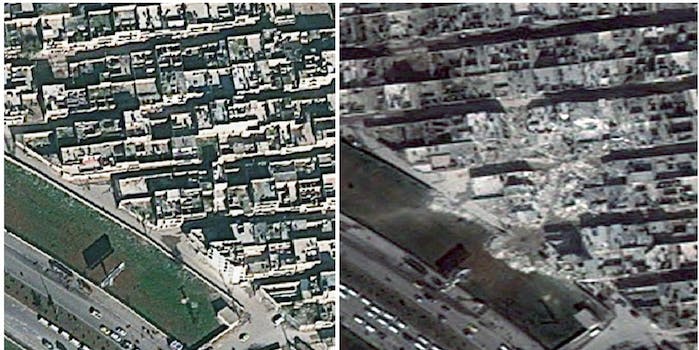 Using satellite images, Science for Human Rights has put together a stunning collection of before-and-after photos of Aleppo, Syria.

In the last several years, imaging technology has opened up the past.

Google Earth has led to the discovery of a new human ancestor and of 2,000 new archaeological sites in the poorly understood Arabian peninsula. LiDAR (light detecting and ranging) mapping has allowed us to reevaluate the scope of pre-contact populations in Mesoamerica, and satellite photography has enabled us to identified 13 previously unknown pyramids in Egypt, as well as 1,000 new tombs and 3,000 lost settlements in the Nile Delta.

However, as much as the past may inform the present, and our understanding of it, a project like the Science For Human Rights’s Aleppo Satellite Images 2012-2013 takes the academic out of war.

In partnership with Amnesty International, the before-and-after Flickr photo set of Aleppo, Syria—the country’s largest city and its financial capital, a site of horrible fighting between loyalists and revolutionaries—captures the horrendous, destructive force of war-right-now.

Among the losses documented are the 17th century Aleppo souk (marketplace), a UNESCO World Heritage Site, and the minaret of the city’s Great Mosque.

Of course, in every flattened apartment block around every leveled landmark lived dozens, perhaps hundreds of families. The civil war in Syria has resulted in 6 million displaced people, something the photos bring home in more graphic fashion.

Amnesty has also created a tool that allows a user to toggle back and forth between how a section of the city or landmark looked before the fighting and how it looks now.

One of the gifts of these awful images, if it can be put like that, is retroactive. As picturesque, stirring, or emotionally distant as an ancient war might seem to those downstream from it in time, there was never a single one from which corruption did not issue. Individual human life above all, but not just that.

War also destroys those larger expressions of our common journey. Wells are always poisoned, places of worship are always profaned, and marketplaces are always destroyed. The structures that give voice to, and hold together, society itself are always wrecked. It is easy to forget how much we destroy. It is less so when confronted by these photos, a confrontation that would not have been possible on this scale and with this ease before photo sharing became part of our common vocabulary.