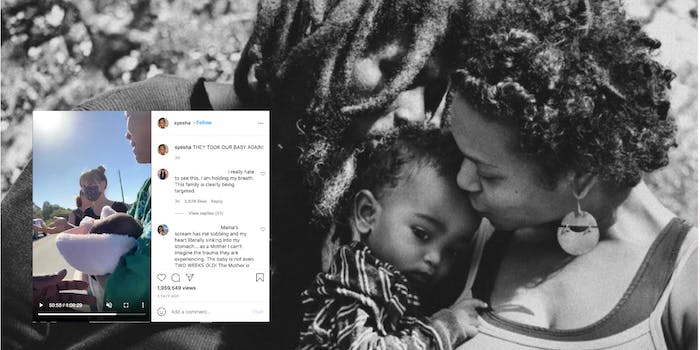 The incident happened just months after Mercado lost custody of her first child—2-year-old Amen’Ra. Her son was placed in the foster care system after what Mercado and her partner, Tyron Deener, thought was a routine hospital visit. Mercado said she took her son to the doctor for fluids while transitioning from breastfeeding to a bottle, but the hospital claims the boy was “severely malnourished” and the parents denied him a recommended B12 shot.

Mercado and Deener deny these claims, saying they never rejected a B12 shot and that CPS “legally kidnapped” their child based on these supposed lies. The pediatrician who assessed Amen’Ra, Dr. Sally Smith, was previously investigated by USA Today for being too quick to diagnose child abuse, which she denied to the outlet.

Mercado broadcasted her latest interaction with authorities to her Instagram. She captioned the video, “THEY TOOK OUR BABY AGAIN.”

The video shows Manatee County sheriff’s deputies surrounding the couple’s car. Police then took custody of the infant to bring her to the hospital for a physical, despite Mercado’s claims that they had paperwork proving she had just gone the day prior.

“My baby is days old, and you’re taking my baby away from me,” she says through tears. “You have no heart. This is so wrong.”

In the video, Mercado holds the infant in a pink blanket and begs authorities not to take her. She also explains that her baby is breastfed. After pumping some breast milk into a bottle, however, she reluctantly hands her baby over to deputies.

“My baby is healthy and happy,” she said. “All you had to do was call the attorney. We have all the paperwork. You guys have created so much trauma.”

The video of the dispute has been viewed nearly 2 million times. Many of her supporters say they believe racism played a part in the interaction since Mercado and Deener are both Black. Speaking to Buzzfeed, the deputy executive director at National Advocates for Pregnant Women, Dana Sussman, said that CPS is often viewed by pregnancy advocates as a “family policing system” rooted in racist ideas about who can be a parent and when. Sussman also told the outlet that families “flagged” by the system can be surveilled and evaluated when they get pregnant again—potentially why Mercado’s newborn was taken.

People flooded Mercado’s comments with messages of sympathy and support.

“I really hate to see this,” one commenter wrote. “I am holding my breath. This family is clearly being targeted.”

“Mama’s scream has me sobbing and my heart literally sinking into my stomach… as a Mother I can’t imagine the trauma they are experiencing,” another said. “The baby is not even TWO WEEKS OLD! The Mother is not even TWO weeks Postpartum. This is abuse. This is torture.”

“This is not right or humane,” one person commented. “This is the most heart breaking thing I have watched all year.”

Prior to this week’s events, the couple launched a GoFundMe to help get their son back and it has raised over $300,000.