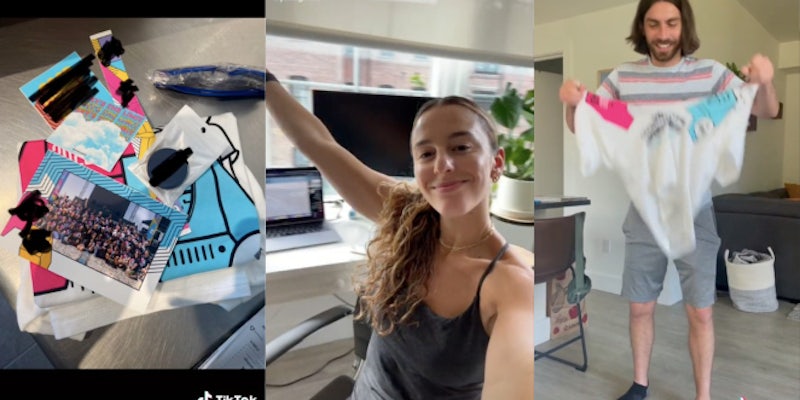 ‘Salt in the wound’: Company mails ‘swag bag’ from event to worker after she was laid off

'Not the delayed swag box.'

A woman on TikTok says her former employer mailed her a swag bag just days after laying her off.

The woman, Jess Gelbwaks (@jessgelbs), says in a recently posted TikTok that this was her third time getting laid off during the pandemic.

“It was kinda out of the blue and it really sucked but this is my third time getting laid off since the pandemic so I was kinda used to it,” she says in the video, which garnered about 113,000 views as of Wednesday.

As if to add “salt in the wound,” Gelbwaks’ former employer sent her a swag bag from an event they recently had, she says. She does not reveal the name of the company.

In response to the tone-deaf gesture, Gelbwaks says she and her boyfriend destroyed the swag items.

“We love a supportive king, and you don’t owe your company shit,” Gelbwaks says in the video as she shows her boyfriend ripping apart the swag T-shirt and breaking the company sunglasses.

Viewers expressed their condolences to Gelbwaks while also applauding her supportive boyfriend.

“I love the boyfriend support in the destruction <3,” one viewer commented on the video.

“He is the only energy we need,” another viewer said of Gelbwaks’ boyfriend.

Some viewers said they had similar experiences with their former employers sending them swag and questioned why companies don’t cancel swag bag shipments after laying off employees.

“Not the delayed swag box … my company sent me 500 useless business cards,” one user said.

“I received my swag box of branded masks and sanitizer a week after being laid off,” another user wrote.

“Ok but as somebody who does people ops in a fintech… I simply want to speak to whoever didn’t pause the swag packs when layoffs were happening,” one user commented.

Nevertheless, users reassured Gelbwaks that if she can survive three layoffs, better things are sure to come soon.

“Third time?! I was upset over my first layover recently. This is such a good way to release haha. Better things are in store for us!” one viewer commented.

One comment read, “If you can survive 3 layoffs, you can do anything!!!”